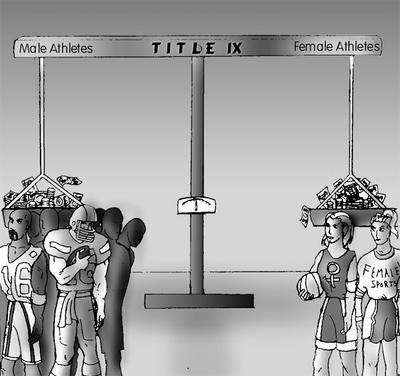 This morning I watched on as the California Assembly passed a resolution honoring the 33rd anniversary of Title IX. As a big supporter of women in sports and a believer in the goals of this landmark measure, I have to admit my disgust at how Title IX has been used to eliminate men’s sports programs at small colleges across the country. And even more upsetting is how; here in California, my favorite sport of football has often been the target of choice.

In 1998 Reason Online published an article by Walt Olson stating:

The settlement’s compliance deadline was set for fall 1998, and by mid-1997 one of its results had become clear: massive cuts in men’s sports throughout the Cal State system. In June, Cal State-Northridge dropped its baseball team, which had ranked among the nation’s top 20, along with soccer, swimming, and volleyball. Cal State-Bakersfield drastically curtailed its outstand-ing wrestling program. San Francisco State, Fullerton, Hayward, Chico, Long Beach, and Sonoma all got out of football. (Also Northridge)

Federal regulations dictate for schools to meet the terms of Title IX’s promise of equal treatment for female athletes in a number of ways. They can demonstrate that opportunities for women are “substantially proportionate” to their enrollment, that opportunities are commensurate with the level of students’ interest, or that new teams are being added. Then in 1996 the courts further clarified the rules stating, that rather than simply counting the number of spots allotted to teams they would be counting the actual number of athletes.

As small schools struggled to comply with this new definition of the Title IX, they realized that they could not do so by simply adding more sports for women. A more realistic approach would be to cut programs for men. Thus small schools began eliminating men’s sports programs; targeting first those programs that were not revenue generating.(ie. Wrestling, golf and gymnastics.)

The Cal State-men’s-sports massacre made news from coast to coast, and for good reason: As the Times headline predicted, it is going to serve as a model for the rest of the country. Last April, the U.S. Supreme Court declined to review a court decision against Brown University, leaving in place an interpretation of the federal Title IX law that has already begun to devastate such men’s sports as track, wrestling, swimming, and diving nationwide. A survey by the National Collegiate Athletic Association found colleges have axed 200 men’s teams in recent years, with 17,000 slots lost. Gymnastics teams, which numbered 133 as recently as 1975, are down to 32 overall. Even golf, a sport whose popularity in the outside world has soared, is hard hit.

Another article by Mark Clayton of the Christian Science Monitor reports that other schools such as St. Johns University, felt it was easier to eliminate the program with the largest amount of male participants. That program is almost always men’s football. In one fail swoop they eliminated 62 spots for male athletes which usually meant other men’s sports would be spared.

While the university also trimmed some other male and female athletic teams, school officials say they needed to drop the 62-member football team to meet a specific test of equality under Title IX: fielding numbers of men and women athletes in proportion to the student body – which has a growing female majority.

There has got to be a better way to create gender equity in college sports! It is a travesty, the way Title IX has been implemented. But even worse is the response of these ultra-left feminist groups when anyone dare speak out about this problem.

In 2000 the San Francisco Chronicle ran a piece outlining all the successes of Title IX in California:

“Significant progress has been made. All of the schools had a very large gap to make up,” Joplin said. “We are taking them at their word that they will continue compliance with the goals.”

Isn’t it time we took another look at how Title IX is being implemented? After all, I find it difficult to believe that this policy of “addition by subtraction” is truly consistant with the spirit and intetion of Tittle IX.