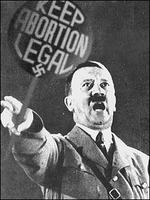 A new analysis of the most recent abortion data shows that the number of U.S. women having the procedure is continuing its decade-long drop and stands at its lowest level since 1976.

But as usual the mainstream media has left out much of the story. For example, this study, which was conducted by Physicians for Reproductive Choice and Health® (PRCH) and The Guttmacher Institute acknowledges that 96% if all abortions are performed as a matter of convenience for the expectant mothers.

Less than 3 % of all abortions are performed to protect the health of the mother and less than 1 percent of abortions were to terminate pregnancies due to rape or incest. The most common reasons given by mothers for killing their unborn children are as follows:

• 21% Inadequate finances
• 21% Not ready for responsibility
• 16% Woman’s life would be changed too much
• 12% Problems with relationship; unmarried
• 11% Too young; not mature enough
• 8% Children are grown; woman has all she wants

So, in regards to abortion, what we are truly weighing is a woman’s right not to be inconvenienced vs. a child’s right to live. The health of the mother is barely a factor in the abortion decision.

• Amongst Industrialized nations, America is second only to Australia in the rate of unborn children put to death. They must use the word “industrialized” because even subconsciously they agree that there is nothing civilized about killing children.

• Almost 50% of those having abortions have had previous abortions. And yet they insist that that women aren’t using abortion as a form of birth control?

• Black and Hispanic women together make up more than half (51.8%) of women having abortions. “This proportion is greater than their proportion in the population because they have a higher rate of unintended pregnancy, and, among black women, because they are more likely to resolve an unintended pregnancy through abortion.” Black women make up less than 12% of the US female population, but according to the CDC they make up nearly 35% of all those receiving abortions. (see Abortion! Because Lynching is for Amateurs!)

• 71% of all abortions are performed in abortion clinics. These are not impartial hospitals or doctor’s offices where a woman has access to objective information on the risks of abortion or the availability of abortion alternatives. These folks have a huge financial interest in the expansion of the abortion industry.

• 52.4% of those who have abortions are 24 years old or younger; almost 20% are teenagers. These are young women and teenagers who are too young to understand the psychological and physical damage that can be caused by abortion.

Although the report declares abortion to be safe, only mortality statistics are given. There are no statistics acknowledging the number women who have suffered physical complications or psychological trauma as a result of abortions.

Here are just a few that I found:

• 1 in 4 (24.3%) – Complications in future pregnancies (may include excessive bleeding, premature delivery, cervical damage, and sterility). Acta/Obstetrics and Gynecology Scandinavia 1979; 58:491-4

• Approximately 60 percent of women who experience post-abortion sequelae report suicidal ideation, with 28 percent actually attempting suicide, of which half attempted suicide two or more times. Researchers in Finland have identified a strong statistical association between abortion and suicide in a records based study Gissler, Hemminki & Lonnqvist, “Suicides after pregnancy in Finland, 1987-94: register linkage study,” British Journal of Medicine 313:1431-4, 1996.