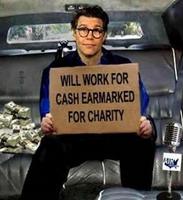 Despite the fact that the MSM is refusing to cover the Air America scandal, people are seeking out information on what is going on. Liberal bloggers and message boards are clinging desperately to the statment issued by AA stating that they will pay the money back. Well to all you liberal lurkers reading this post, it is time to face the facts.

1. Taking almost $1 million from a Boys & Girls Club is a big deal.

Regardless of how you try to spin it, this is just wrong. Even though the folks at Gloria Wise are ultimately responsible for giving up the money, officials with AA knew this was a risky venture and taking the money from a non-profit was not exactly the most ethical thing to do.

And if Evan Cohen was the only one who knew it was going on, then the lack of communication within the organization about key business dealings rises to almowt Enron-like proportions.

2. Air America has only said they would pay the money back. It is unclear if any money has actually changed hands.

The left-wing radio network, which showcases Al Franken, last Friday made a $50,000 repayment on the loan to an escrow account controlled by the station’s lawyer.
“The [city] Department of Investigation advised Air America to repay $875,000 into an escrow account from which no money can be disbursed without our approval,” said DOI spokeswoman Emily Gest.

“Air America has not followed that recommendation.”

But an Air America official told The Post yesterday that both sides had agreed to a payment plan months ago and that they were on schedule with their payments.

That was news to the Boys & Girls Club. “Air America has agreed in principle to give the money, but nothing has been finalized yet,” Grossman said yesterday.

“They haven’t agreed how and when to do it.”

3. Air America was doomed from the start.

Just ask Al Franken who found points out on his show that he and other radio talent were dupped into believing that the network had enough funding to last three years. It turns out that three weeks was more like it. (Read a Transcript of Al’s comments at Radio Equalizer.)

If you put thier lack of funding together with the fact that the way they tried to manufacture a large network instead of letting it grow naturally. Not that it would have grown, but they could have failed on a much more modest scale.