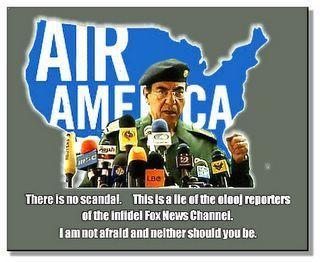 Well the first wave of calls to Air America had an interesting outcome. Sacramento’s Christine Craft mysteriously did not have a call screener today; so nobody was able to get through. I personally tried at least eight times and spoke to at least five other people who experienced the same thing.

I will not assume that the lack of a call screener was intentional, but it does fit the Air America MO.

But of course our absence did not stop Ms. Craft from bashing the Western Alliance. While I won’t go into all the details, let’s just say it wasn’t flattering. She spent the majority of each hour talking to herself and when she did open it up for calls only only CA High School Conservative could get through.

The interesting thing is that liberal boards and bloggers were talking about this issue all weekend. A message board for AA’s Randi Rhodes provides the best example. In the midst of their usual name calling are some interesting comments and questions.

Aren’t they already paying the loan back? I haven’t really been paying attention to this story.

Mailroom Clerk is beside himself as he inquires:

State Attorney General Eliot Spitzer yesterday opened an investigation into the Bronx social-services agency that made $875,000 in bizarre loans to Air America radio.

This cannot be true…taking money from poor kids??? Why would Al do this??

And evidently WA and friends are not the only one’s asking questions. State Campaigner shares:

I was half-listening on Franken, some guy called in from “Switzerland”, all I heard clearly was his last comment to Franken was that he keeps reading about about the Air America Enron scandal. Guess the attack is in progress. Franken explained about the “Enron”scandal after the commercial break. Listen to see if anymore call in today.

And this all despite the fact that their most experienced members advised them that we would be watching.

I think what Libertas is trying to say is don’t advertise any activities regarding trolling other boards. Remember, we have lurkers who watch what we write and may cut and paste it to their own boards.

Was he talking about me? Tehe!

And needless to say, his worst nightmare was realized when the Mailroom Clerk exposes his concerns about how effective they have been..

Lets not be quite so dismissive. They’ve been kicking our ass ever since Hillbily Clintoon backed ‘welfare reform.’ Perhaps we need more organizing and less invective, otherwise we risk becoming the ‘playground party’-good at calling names, and not much else. Coming close the past 2 pres. elections and in OH is nothing to brag about.

As far as how to effectively put forth our own ideas and concerns in in this world of ideas, I think the Freepers, the Western Alliance and other right-wing media activists provide a good example. They’re not stupid. The dittoheads, like my Dad, have been running circles around progressives. They know how to make their voices heard, they put financial support into various projects, they learn to counter the arguments of people they disagree with.

Of course we know how to counter their arguments. They lie, we tell the truth.

Amidst the trash talking, liberal rhetoric and left wing conspiracy theories, there was some interesting dialogue. They have the links to Michell Malkin and the Radio Equalizer. So they should know the issue. But other than the statement from Air America, they really did not have any way to refute the charges that might very well sink AA’s ship.

So all in all it was worth the effort. Thanks for your participation. Well keep you posted on what’s next.