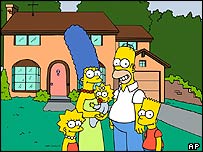 Americans know more about The Simpsons TV show than the US Constitution’s First Amendment, an opinion poll says.

Only one in four could name more than one of the five freedoms it upholds but more than half could name at least two members of the cartoon family.

About one in five thought the right to own a pet was one of the freedoms.

A new museum dedicated to the First Amendment said the findings showed there was a pressing need to explain one of America’s basic laws better.

“We have our job cut out for us,” said Joe Madeira, director of exhibitions at the McCormick Tribune Freedom Museum.

Another finding from the poll, a telephone survey of 1,000 random adults with an error margin of 3%, was that 22% of Americans could name all five Simpson characters.

By comparison, just one in 1,000 people could name all five First Amendment freedoms.

Now we know why Americans have been so easily fooled into believing that the “Separation of Church and State” is actually in the constitution.