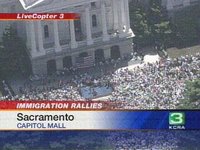 Last week I sat in for Sacramento Area talk show host Eric Hogue who does the morning show in 1380AM & 105.5FM KTKZ. Much of the discussion that day was on the issue of whether or not there was an organized and deliberate effort by Mexican nationals (and some Mexican American elected officials) to repatriate California and several other western states back to Mexico. The movement is called “La Reconquista” and is part of a greater concept known as Azatlan. (Click here to listen)

And then this week the Capitol Weekly had an article questioning whether we were making much ado about nothing:

But making the connection between fringe reconquistas and some of the state’s most-successful Latino politicians is a different story.

The ad campaign, which has been running on Sacramento television for two weeks, is the work at Californians for Population Stabilization (CAPS). It offers viewers a Web address where they can listen to recordings of what they say are racist and even treasonous statements by the likes of Rep. Joe Baca Jr., D-San Bernardino; Assembly Speaker Fabian Núñez, D-Los Angeles; California Democratic Party chairman Art Torres and Los Angeles Mayor Antonio Villaraigosa. Most of these date from the mid-1990s debate over Proposition 187. These statements include Baca’s references to “civil war” and Torres characterization of 187 as “the last gasp of white America in California.”

The CCIR–which was a sponsor of Proposition 187–and other groups also try to link the Aztlán concept to these leaders via their past involvement with the student group Movimiento Estudiantil Chicano de Aztlán (MEChA).

But if you’re a Latino college student in the U.S., said Sen. Gil Cedillo, D-Los Angeles, there is a good chance you’ve had some involvement with MEChA. The organization functions as a catch-all social, political and academic organization for Latino students. There is no central organization, just thousands of individual chapters, he noted, meaning there is no one to moderate the sometimes extreme political speech college students of all stripes are prone to.

Notice that Mr. Cedillo doesnt address the actual statements offered by his collegues? And one thing is curiously missing from the article… a denunciation by any of any of the Latino electeds quoted! Curious…..

Other posts on this topic:

The Truth about Azatlan- From their own mouths!

Mexico claims California by eminent domain…Look for this headline by 2050!