In 1854, the GOP is founded in opposition to slavery. In 1964, we elected segregationist Strom Thurmond. Now in 2010, we nominate an African-American to fill Thurmond’s old seat. The circle is complete! 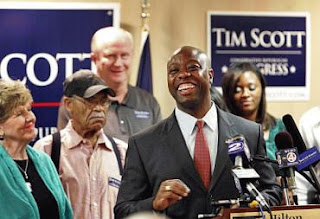 Unlike their Democratic counterparts, South Carilina Republicans have nominated an African-American man who is undoubtably qualified and ready serve his constitutents in Washington DC.

Voters in South Carolina nominated a black Republican lawmaker for an open congressional seat Tuesday, rejecting a renowned political name and potentially changing the face of the national party.

State Rep. Tim Scott defeated Paul Thurmond, an attorney who is son of the onetime segregationist U.S. Sen. Strom Thurmond. Scott, who won the runoff with 69 percent of the vote, is poised to become the nation’s first black GOP congressman since 2003.

Scott, 44, owns an insurance business and became the first black Republican in the South Carolina Legislature in more than a century when elected in 2008.

I think the fact that Mr. Scott defeated the son of the late Sen. Strom Thurmond is a wonderful bit of irony.

It will be interesting to see how the national establishment reacts to him. Will he be a game changer the way that JC Watts was during his tenure; helping the party develop policy to address issues beyond the usual GOP focus? Or will he be an establishment guy trying to sell the party as it’s ambassador to the black community?

I don’t know him. So, I cannot say which he will be. But I everything I have heard about him is that he is a conservative, independent thinker. That should bode well for the type of leader he will be in Congress.

The one thing I do know is that he is no Alvin Greene!