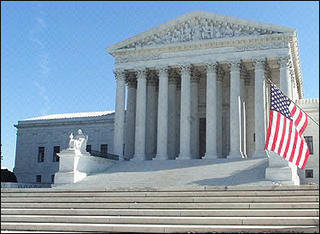 President Bush chose federal appeals court judge John G. Roberts Jr. on Tuesday as his first nominee for the Supreme Court, selecting a rock-solid conservative who has won broad support from both parties but still faces what could be a contentious battle over the direction of the nation’s highest court.

Bush offered the position to Roberts in a telephone call at 12:35 p.m. as he was hosting a luncheon for the prime minister of Australia, John Howard. He was to announce it later with a flourish in a nationally broadcast speech to the nation.

His selection was somewhat of a surprise since there had been some expectations that he would replace retiring Justice Sandra Day O’Connor with a woman or minority.

Roberts has been on the U.S. Court of Appeals for the District of Columbia Circuit since June 2003 after being picked for that seat by Bush.

Advocacy groups on the right say that Roberts, a 50-year-old native of Buffalo, N.Y., who attended Harvard Law School, is a bright judge with strong conservative credentials he burnished in the administrations of former Presidents Bush and Reagan. While he has been a federal judge for just a little more than two years, legal experts say that whatever experience he lacks on the bench is offset by his many years arguing cases before the Supreme Court.

“The court’s conclusion in Roe that there is a fundamental right to an abortion … finds no support in the text, structure or history of the Constitution,” the brief said.

In his defense, Roberts told senators during his 2003 confirmation hearing that he would be guided by legal precedent. “Roe v. Wade is the settled law of the land. … There is nothing in my personal views that would prevent me from fully and faithfully applying that precedent.”

While he doesn’t have national name recognition, Roberts is a Washington insider who has worked over the years at the White House, Justice Department and in private practice.

In the Reagan administration, Roberts was special assistant to the attorney general and associate counsel to the president. Between 1989 and 1993, he was principal deputy solicitor general, the government’s second highest lawyer, who argues cases before the U.S. Supreme Court.

In the early 1980s, Roberts was a clerk for Rehnquist before Reagan elevated the retiring jurist to the top chair in 1986.

It was Rehnquist who presided over the swearing-in ceremony when Roberts took his seat on the appeals court for the District of Columbia. It took a while for Roberts to get on the bench. He was nominated for the court in 1992 by the first President Bush and again by the president in 2001. The nominations died in the Senate both times. He was renominated in January 2003 and joined the court in June 2003.

Roberts’ nomination to the appellate court attracted support from both sites of the ideological spectrum. Some 126 members of the District of Columbia Bar, including officials of the Clinton administration, signed a letter urging his confirmation. The letter said Roberts was one of the “very best and most highly respected appellate lawyers in the nation” and that his reputation as a “brilliant writer and oral advocate” was well deserved.

“He has been a judge for only two years and authored about 40 opinions, only three of which have drawn any dissent,” said Wendy Long, a lawyer representing the conservative Judicial Confirmation Network, adding that his record appears to suit Bush’s desire to nominate a judge who will apply the law, as written, and leave policy decisions to the elected branches of government.