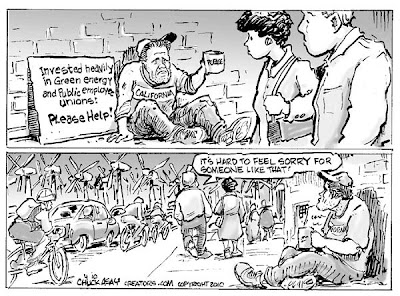 That’s right! Democrats are once again proposing significant tax incentives to encourage employers to do business right here in California… that is if they happen to be a green technology company. All other employers… you can go take a hike!… a tax hike that is!
Right on the heals of proposing over $12 billion in new taxes on Californians, Assembly Democrats (specifically Assemblymember Joan Buchanan) are proposing an increase in the research and development tax credit for companies that specialize in the development of alternative energy and green technologies. Buchanan states,

In theory, this sounds like something Republicans should support – making it more cost-effective for businesses to come to and stay in California, thus providing much needed jobs. In fact, legislative Republicans have gotten behind such targeted efforts in the past. In 2009, they supported Assembly Speaker Karen Bass’ bill that provided tax credits for movie and television productions to studios that film here in the golden state. And a few months ago, they supported a manufacturer’s tax credit for green tech companies. So, why shouldn’t they get behind this most recent effort to provide much needed tax relief to at least some California companies? One word – Hypocrisy!
The California Legislature should not be in the business of picking winners and losers during these tough economic times. There is a basic hypocrisy in the liberal mindset that says, California is such and attractive place to do business that employers will stay here no matter how much we increase taxes and regulation; then at the same time arguing that we need to provide tax incentives to certain industries (the ones they happen to like) in order to bring and keep them in California. But wait…I thought those incentives didn’t make a difference?
Assemblyman Tom Amiano once lamented in a committee hearing that he was tired of people saying that our anti-business climate was chasing business out of the state. He stated that he just didn’t see the dire emergency. Apparently he forgot that in just a few short years, California went from the world’s fifth largest economy to the world’s eighth largest economy. And that was before the legislature passed the largest tax increase in state history. It is only a matter of time before having the highest sales tax, highest gas tax and second highest corporate tax rate drive us even further down the economic rankings.
It is important to note that is fact is not lost on Democrats. In fact Buchanan herself discusses the vital role that tax incentives can play in keeping businesses in California as she declares,

“This incentive will encourage business to remain in California and motivate new businesses to locate here, retaining and creating permanent jobs and helping to spur California’s economy.”

So what’s with the Jekyll and Hyde impression that Democrats seem to be doing on taxes? They know that tax cuts attract businesses and create jobs. But at the same time they are offering tax cuts to only a few select businesses, they are increasing taxes on the rest of California. What effect do they honestly believe that these tax increases will actually have?
Or maybe a better question is, do they even care?