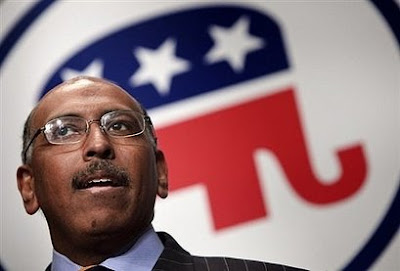 The hypocracy of the Republican Party never ceases to amaze me.

Following the narrow victory of Michael Steele, who becomes the first African American to lead the Republican Party, former California Republican Party Leader Shawn Steel called the result “the most thoroughgoing change since Ronald Reagan took over the Party.”

Steel and other Republicans were not interested in seeing Michael Steele anywhere near the controls of the Republican Party. Chairman Steele plans to bring added diversity to the Repubicans, committing key resources – posts, money and influence – into broadening the appeal of the party to a greater number of Americans, something to which past Republican leaders have only paid lip service. This is EXACTLY what the traditionalists in the Party are NOT interested in – and this includes Shawn Steel who, despite a myriad of calls to broaden the CA Party’s outreach efforts, stuck to the tried and true methods of the 1950s.

The election of Michael Steele does send a message to the rest of the country that the party may be interested in moving in a new direction. However, just like the election of President Obama does not solve the challenge of race in America, Steele’s election to the chairmanship of the Republican Party will not by itself fix its image problem. Unfortunately, despite the calls for “Change We Can Believe In” inside the Republican Party by its new Chairman and others, look for continued window dressing – with the Black Superman the principle maniquin on display in the shop window.

You can read more at Politico.com