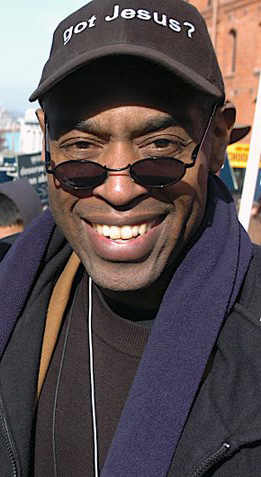 Last year, Oakland city council members to pass a “Mother May I” ordinance, prohibiting approaching within eight feet of women entering abortion clinics without their consent. The penalty for illegally approaching a person to talk or hand out a leaflet is one year in jail and/or a $2000 fine.

On May 13, 2008, Rev. Walter Hoye, an African-American pastor who feels a special calling to work for the end of the genocide-by-abortion taking place in the African-American community was arrested for allegedly violating the ordinance. One of the witnesses against him was an Oakland city attorney who was secretly watching from a car. In an e-mail to the clinic director, the city attorney said the escorts’ use of signs to block Rev. Hoye “was creative and seemed to be effective.”

The district attorney then expanded the complaint to include four counts, two for “unlawful” approaches and two for allegedly using “force, threat of force, or physical obstruction” against two of the clinic escorts. At a pre-trial hearing in July, Rev. Hoye’s attorneys cross-examined these “victims.” The escorts admitted that Rev. Hoye never used force against them, threatened them, or blocked them. They proudly testified that they routinely block Rev. Hoye to prevent patients from seeing his sign. Nevertheless, the DA has not dismissed the charges against Rev. Hoye.

“The district attorney’s office appears to be using these trumped-up charges as leverage to pressure Rev. Hoye into giving up his free speech rights,” said Hoye’s attorney Mike Millen. “The threat of four years in jail is a potent one, but my client is more interested in getting the truth out, both on the sidewalk and in the courtroom.”

Here is a breakdown of the trial from Rev. Hoye’s attornies at the Life Legal Defense Foundation.

The trial of Rev. Walter Hoye is nearing conclusion, after a week of testimony,
mostly from prosecution witnesses, about Mr. Hoye’s alleged activities at the
Family Planning Specialists clinic in Oakland, California.

Unbeknownst to these witnesses and the district attorney, however, an associate of Mr. Hoye had been videotaping from across the street on both the days on which Mr. Hoye was accused of violating the law. Thus, until the defense revealed the existence
of the videotape during cross-examination, the witnesses conjured up phantom patients whom Mr. Hoye had allegedly harassed, as well as claiming that he threatened two escorts and the clinic director.

The most egregious testimony came from the first witness, clinic director Jackie Barbic, who testified that, while watching Rev. Hoye for about 20 minutes from the building lobby, she saw him approach within a few feet of six to eight patients,
including one who put up her hands in front of her face to ward off Rev. Hoye.

She testified that after seeing these approaches, she went outside with a tape measure to show Rev. Hoye what eight feet looked like. According to her testimony, Rev. Hoye then sauntered toward her, with a “smirk” on his face, until he was within two feet of her; all the while, she was backing off, saying “Stay away from me! Back down! Back away!” with her hands held up to protect herself. During her testimony, her voice choked with emotion as she described how fearful and intimidated she was.

On cross-examination, Ms. Barbic and the jury watched the video of this incident. The video showed Ms. Barbic approaching Rev. Hoye and pointing a tape measure at him—and Rev. Hoye not moving an inch. In the video, she can be seen lecturing him, and then talking to others. Mr. Hoye moved away. A few minutes later, the same scene plays out again, with Ms. Barbic again pointing the tape measure at Rev. Hoye, and him moving down the sidewalk in a different direction.

When Ms. Barbic was asked if either of these were the incidents she was talking about, she immediately responded that these were not, and that there was a third incident with a tape measure that occurred later. Contrary to her earlier testimony
detailing her movements that morning, she now claimed that the video only showed when she had come down earlier in the morning to explain to the escorts where 100 feet from the clinic started. She also claimed that she had been called down to investigate the presence of a moving van parked near the front of the clinic, because she had to make sure there wasn’t a bomb in it. The district attorney asked her if she was “100% certain” that the incident on the video was not what she had testified about earlier, and she confirmed that she was 100% certain that this was not it and there was a later incident when Mr. Hoye threatened her just as she had described.

There was, of course, no later incident, as the remaining video of the morning showed. Ms. Barbic’s other testimony was also contradicted in virtually every particular either by the video or by other prosecution witnesses. Mr. Hoye did not approach any patient across the street; no patient shielded herself from him; Ms. Barbic had already talked to the men loading and unloading the moving van an hour earlier; Ms. Barbic had only watched Mr. Hoye for a minute from inside the building.

After the existence of the videotape was revealed to the prosecution, there were no more claims that Mr. Hoye had made any threatening gestures toward anyone, although escorts did claim more approaches to phantom patients. Despite the implosion of Jackie Barbic as a witness, the district attorney kept trying to conjure
evidence of a “threat of force” from Mr. Hoye out of nothing.

One escort claimed she felt intimidated when she saw Ms. Barbic approach Mr. Hoye with the tape measure and tell him to back off, and “Walter didn’t move. He just stood there.” In this escort’s mind, the law required Rev. Hoye to back away from the clinic director, and the fact that he didn’t do so was perceived by her as very
intimidating. Or so she testified. Upon cross-examination, it was revealed that she had never mentioned this alleged intimidation to the police or the district attorney until after the district attorney had already filed the charges against Rev. Hoye for allegedly intimidating her. In other words, the district attorney first filed the charges naming her as a victim, and then went desperately searching for evidence to back it up. (The court dismissed this charge at the close of the prosecution’s case.)

In another case, one of the “victims” claimed that she felt “creepy” when Mr. Hoye spoke to her, warning her not to trip on the curb, after she moved in front of him to cover up his sign. Both her testimony and the video confirmed that she repeatedly walked up to Rev. Hoye and took up a position either directly in front of him or slightly to the side, holding a blank sign in front of Rev. Hoye’s sign. As he moved up and down the sidewalk, so did she. When asked why, if she felt intimidated, she didn’t move away, she replied that it was more important that she remain in front of him “to prevent women from seeing what is on his sign.”

Indeed, the escort witnesses were unanimous in this point: that the job of an escort is to prevent women from reading Rev. Hoye’s sign or hearing his message. This was testified to repeatedly, in completely unambiguous terms: “The purpose of holding the blank cardboard is to prevent women from seeing the message on his sign.” They also acknowledged that the message on the sign was “Jesus loves you and your baby. Let us help.” And what does Rev. Hoye say to women? “Can I talk to you for a minute about alternatives?” Those messages are “harassing” and “intimidating” and need to be censored.

The jury has now seen the entirety of the videotapes from these two dates as part of the defense’s case in chief. The trial should conclude early next week.

There is not doubt in my mind that this is a case of malicious prosecution that almost boarders on a conspiracy to deprive Rev. Hoye and other Pro-life advocates of their constitutionally protected right to free speech.
I would ask that you support Walter and others who do what he does by contacting Alameda County District Attorney Tom Orloff and asking that he open an investigation into this prosecution of Rev. Hoye, including:
1) possible prosecution of Jackie Barbic for perjury;
2) whether there was prosecutorial misconduct in charging Walter Hoye with using “force, threat of force, or physical obstruction” against escorts without any evidence that he had at any time done so; and
3) whether there was prosecutorial misconduct in continuing to prosecute Hoye for those crimes in the face of mounting evidence that they were totally lacking in factual basis.
Tom Orloff
AlamedaCounty District Attorney
1225 Fallon Street, Room 900
Oakland, CA 94612
Telephone: (510) 272-6222FAX: (510) 271-5157
Walter will be the Speaker tonight at the Sacramento Republican Assemblys General Membership meeting.