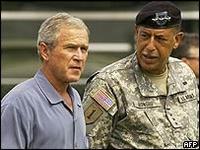 Anyone who objectively looks at the Hurricane Katrina relief effort has to admit the endeavor was fraught with problems. As stories of violence and looting filled the airwaves along with images of senior citizens and infants suffering from lack of food, even President Bush had to admit that the government response to this crisis was “unacceptable.”

Crisis management is an often overlooked skill of effective leaders. For example, when 9/11 hit, President Bush demonstrated true leadership. And even in the debacle that followed Katrina I believe that one can find lessons relating to effective leadership…or what I like to call “Crisis Management God’s Way”

A great example of Godly leadership during a crisis can be found in Chapter 2 of the book of Daniel.

King Nebuchadnezzar had a troubling dream and it scared him. He called all the advisors together for a meeting. He demanded they interpret the dream for him and that they do it not knowing what the dream was. He added to their situation by warning them that if they didn’t come up with an interpretation he was going to kill the lot.

Well as they scattered to their respective places the word spread in the advisory community that a red alert—code blue was in effect.

Daniel was a remnant member of the advisor community and would be swept up in the net for execution if no interpretation was forthcoming. Daniel conferred with his three Hebrew associates encouraging them to prayer. Daniel then waited for God to reveal the dream and save the lives of the advisors.

LESSON #1- Seek Understanding before trying to be Understood (Stop, Listen, Understand and then Act!) Dan 2:14-15

When a crisis erupts people want to see action. Often they don’t know what that action should be, but they want to see something being done. Reports on the ground in New Orleans were full of “Monday Morning Quarterbacking”, finger pointing and suggestions for what the government should be doing. Mayor Ray Nagin gave orders to his police officers to shoot looters on sight; completely ignoring the fact that some of those looters are simply trying to get food and water for their families. Tens of thousands were evacuated to the Superdome despite the fact that there was no food or water to sustain them. You see action without understanding can often result in making things worse.

Daniel made it a point to understand why the king made the decree that he had. A lesser leader, would have lamented on how impossible the king’s demands were. He would have complained about how unfair it was. Daniel’s first reaction was to get understanding so that he could take action.

When in a crisis we must stop our natural instinct to jump into action (without knowing what’s going on.) We must listen to those who do know what is going on and gain enough understanding so that effective action can be taken.

The middle of a crisis is no time to practice one’s adeptness at multitasking. Each decision a leader makes could have dire consequences and thus deserves the leader’s full, undivided attention. As the media hurled questions at President Bush about who was at fault, he made it clear that he was not going to use this time to investigate why things were so messed up. Rather, his administration’s number one mission was to get help to those who needed it.

Confusion is the tool of the enemy and can often result in mistakes. Trying to juggle too many decisions or projects at one time is an easy way to get confused. When an airplane loses cabin pressure passengers are advised to first secure their oxygen mask before helping their neighbor secure theirs. This is to help ensure that both passengers do not pass out before they are able to help one another, thus resulting in their deaths. Always remember “First things first!”

We have a tendency to focus on the effects of problems rather than the causes of problems. The fact that people were looting grocery stores was not the root cause of the problems in New Orleans. It was actually the effect of a lack of food, water, dry clothes and other basic supplies. In order to solve the problem, the first response should have been to get food, water and supplies to survivors ASAP, as opposed to ordering police to shoot looters on sight. Once this was done, it would have been a lot easier to distinguish those who were trying to survive from those who are simply taking advantage of bad situation.

Daniel’s efforts did not focus on trying to save the lives of the advisors. If this had been the case, he may have encouraged them to flee or called for an attempt to overthrow the king (an effort that would have surely been unsuccessful). Instead, Daniel’s actions focused on the root of the problem. God was trying get a message to Nebuchadnezzar and that his anxiety over his dream caused him threaten the life of his advisors.

This is why it is important to FULLY understand the situation before acting (see Lesson#1). Informed action will allow a leader to address the root of a problem as opposed to the fruit of the problem. And as any experienced vinedresser will tell you, a tree with a healthy root will ultimately produce healthy fruit.

LESSON #4- Crisis management demands clear communication (Focus on what you want, not why you want it.) Daniel 2:17

Especially, in the middle of a crisis, it is vital that a leader be clear about what is expected from those he leads. Everyone needs to be on the same page. Probably the saddest example of communication during the crisis in New Orleans was demonstrated by the Louisiana Governor Kathleen Blanco.

During the initial days of the crisis, images of and statements by Governor Blanco were surprisingly absent from most media reports. Both local and federal officials were counting on the state for direction and they received very little. Could Governor Blanco have mobilized other local and state police, fire and medical personnel and sent them to New Orleans? Did she? It is hard to say. Communication and coordination from within the governor’s office was so poor that the White House informed the Governor that if she did not relinquish control of the relief effort to the feds that they would simply take control away from her (An action that local officials were already asking them to do.) Needless to say, there was confusion as a result of poor communication.

In Daniel’s case, he told his friends what was going on and what he needed them to do. Notice that he did not take a vote or entertain objections. Often in a crisis there will not be time to explain why you make the decisions that you do. If you have followed the steps outlined in Lesson #1, they have had their say and you have made the most informed decision possible. Never the less- during a crisis, others will second guess you. Get used to it! It’s part of the job. Simply assure them success does not require their agreement, merely their obedience.

One of the worst things that a leader can do during a crisis is to get involved in the blame game. It simply wastes valuable time and creates division at a time when unity is essential to success. President Bush’s initial response was to accept responsibility by stating that the government’s poor response was unacceptable. But he didn’t start pointing fingers. He simply made it be known that there will eventually be an investigation into how things ran amok.

During his crisis, Daniel did not waste time blaming the king for his unreasonable demands or chastising the advisors for not being able to effectively communicate to the king the enormity of his request. He dealt with the crisis. Then, later during his reflection, Daniel ultimately realizes that the king’s advisors were correct in their initial assessment of the situation. In fact, no man could do what the king demanded. But he knew that nothing is impossible for God.

It is also important to note that post-crisis reflection should always be about identifying successes and correcting errors. The goal of this reflection is not to place blame, but to figure out what happened so that you can be prepared in the future and overt the same mistakes.

This is also the time when a leader accepts responsibility for their decisions and the actions of those they lead. There are some things that may not be their fault, but ultimately the buck stops with them.

FINALLY- Walk in Faith not by Sight!

During a crisis our natural instinct is to be moved by what we see… to let our emotions take over and let fear and confusion set in. However, it is at this point that our faith should instinctively kick in. And it will if we practice these lessons in crisis management in our everyday lives.