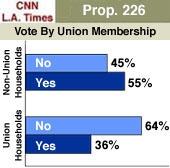 Shades of the 1998 primary election and Prop. 226 come to mind when I think of this move by the California Teachers Association. Back then the state’s most powerful business advocacy groups cut a deal with labor not to support the paycheck protection initiative in exchange for unions not putting tax-hikes and anti-business initiatives on the ‘98 fall ballot.

The announcement by CTA President Barbara Kerr, in a news conference with business leaders who had opposed the measure, averted what was shaping up as a particularly bruising and costly ballot fight next year.

But instead of preparing for battle, an unlikely set of political bedfellows – teachers, prison guards, commercial property owners and manufacturers – announced they would work together to submit new proposals to the state Legislature to help fund California schools.

Unlikely is right! The CTA took $2 million dollars from their members to pass this initiative and had over 900,000 signatures to get it on the ballot. And if last year’s Prop. 63 was any indidcation, Californians are more than willing to raise taxes, as long as it isn’t thier own.

Now, it is important to note that business leaders insist that no deal has been cut.

Both Hime and Kerr denied that any deal had been worked out between opposing sides in exchange for dropping the initiative.

“It doesn’t signal anything other than we’re here and we’re going to talk together,” Hime said.

The California Chamber is also insistent that no deal has been cut. And I hope that it But it is important that these folks know that we remember how they bailed on Prop. 226.

CalVoter.org in their analysis of the measure stated:

Conspicuously absent from the effort, either in planning or its execution, is the business community. The California Chamber of Commerce and many of the state’s top corporations have remained neutral to this point, saying they don’t want to engender backlash at contract time from the unions who represent their employees.

So don’t be surprised if the business lobby (California Manufacturers & Technology Association, California Business Properties Association or the California Chamber of Commerce) takes a neutral position on Paycheck protection again this time around.