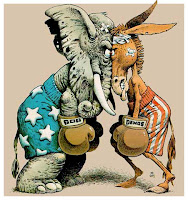 For years, the DeLuz’ have enjoyed many vibrant political debates at our family gatherings. Most of these discussions have featured the musings of two of Sacramento’s leading community activists and political figures; David & Craig DeLuz.

David De Luz, describes himself as a progressive Democrat. David’s community involvement has been primarily with liberal organizations. He has served as President of Sacramento Branch of the NAACP and the Chairman of the Ninth Assembly District Committee for the Sacramento Democratic Party.

Their diverse perspectives and brotherly bond will prove to bring an interesting twist to the discussion of cultural, political and social issues of the day.

This is going to be a lot of fun!

Anyone who has ever spent any time with David & I know that we can tend to have some very heated discussions. But what is different about our family debates is that both of us are politically involved and knowledgeable about the issues we discuss. Also, I know my brother’s heart. And while I won’t hesitate to call him a bleeding heart liberal when appropriate, I know that he genuinely cares for people and is interested in “Good Government”- as if there truly were such a thing! 🙂

In any case, I hope you enjoy reading our posts as much as I am sure we are going to enjoy writing them.

Finally, a forum worthy of an epic battle of good and evil, right and wrong…. of me and ‘the other brother from another planet’!

Seriously, this blog is an opportunity to share with others a fact that Craig and I have know for years – that two people who see the world so differently can disagree and still get along in love and brotherhood. We’ve always been at odds – he loves the Cowboys, I am a Steelers’s fan; he used to love the Lakers while I loved the 76ers (yes – and we can force him to admit his “Smell-A” love affair in the middle of the Capitol rotunda if you put enough pressure on him!!!!). But that never stopped us from kicking someone else’s behind if you mess with either one of us!

We have much respect for each other, and largely agree on the type of world we want to leave future generations – we just really disagree on how to get there.

So sit back, relax and enjoy the fireworks – and who knows, you may just find some “news you can use” and get entertained…