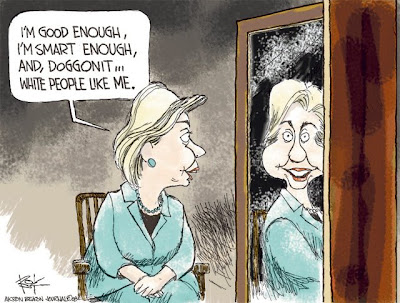 Despite years of trying to portray themselves as “The Party of Diversity” the true face of the Democrats are finally showing through, as exit polling from primary after primary shows that race is playing a major role in how Democrats are voting.

One in five white voters said race was an important factor in their vote and 83 percent of them voted for Clinton against Obama, who would be the first black major-party presidential nominee.

As has been the case in many primary states, Obama won overwhelming support from African-American voters. They went for him over Clinton 91-9 percent.

As a matter of fact Alan Fram of the Associate Press wrote:

Exit polls of voters in Democratic primaries also show that whites who considered the contender’s race _ Clinton is white, Obama is black _ were three times likelier to say they would only be satisfied with Clinton as the nominee than if Obama were chosen.

Isn’t this the enlightened party? … Open to a diversity of cultures?

I could go on and on, but you get the point.

This just goes to show that the party that fought to keep slavery, founded the KKK, instituted Jim Crowe, authored the Southern Manafesto and fought against the 1964 Civil Rights Act hasn’t strayed too far from it’s racist roots.

As far at their modern day racist policies… I’ll leave that for another post.