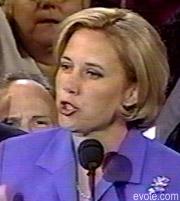 “Now is not the time for finger-pointing. Now is the time to rebuild.”

These were the words of Senator Mary Landrieu (D- Louisiana) during an interview with Chris Wallace on Fox News Sunday. But this was in stark contrast to statements made by the Senator on the floor of the Senate decrying the federal response to Hurricane Katrina.

“They gambled that no one would notice if Louisiana’s critical and vital role in our national economy was threatened. And Washington rolled the dice and Louisiana lost.”

Senator Landrieu, in full spin mode, refused to apply the same critical eye on fellow Democrats elected at the state and local levels.

“I am not going to level criticism at local and state officials. Mayor Nagin and most mayors in this country have a hard time getting their people to work on a sunny day, let alone getting them out of the city in front of a hurricane. And it’s because this administration and administrations before them do not understand the difficulties that mayors — whether they are in Orlando, Miami, or New Orleans — face.”

Is this Democrat senator blaming local and state employees (who also happen to be members of public employee labor unions) for refusing to help in the evacuation before Hurricane Katrina hit land? Not quite…

“In other words, this administration did not believe in mass transit. They won’t even get people to work on a sunny day, let alone getting them out…”

Am I the only one who is confused? When did the President of the United States become responsible for getting local public employees to report to work? Even by Democrat standards this is a far reaching accusation.

The reality is Senator Landrieu is not interested in finding out what went wrong. She is clearly engaging in the very “Finger Pointing” that she is stated this is “not the time for” .

The Blame Game is in full effect!

You can also see Senator Landrieu in full denail mode in the following Fox News story outlining the issues surrounding the poor government response to Katrina. (Click Here for the Video)