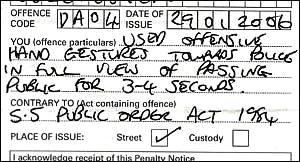 Not particularly important, but very funny. Simon Thompson was issued a ticket for flipping the bird to a speeding camera manned by traffic police.

Simon Thompson, 41, made the middle finger curse when he spotted the mobile camera as he drove home from work WITHIN the speed limit.

He was stunned half an hour later when the two cops who had been operating the device knocked on his door — and handed him a fixed penalty notice for making offensive gestures under the Public Order Act.

I don’t know which is more ridiculous:

• The fact hat the police bothered to follow this guy to give him a ticket or;

• The fact that Simon Thompson is the Headmaster at a local college.