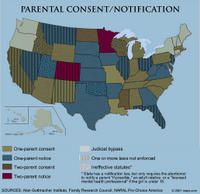 In a lawsuit filed yesterday, supporters of Prop. 73 challenged the ballot arguments submitted by opponents which were not supported by the facts.

Parents’ Right to Know, the group behind Proposition 73, said in a lawsuit filed Thursday that it objects to the Campaign for Teen Safety implying the law would apply to “teenagers” when it would cover only minors under 18. The sponsors also want the state to strike language saying “millions of concerned parents” are against the initiative without data backing that claim.

“It is illegal to present such false material because it costs several million dollars for the secretary of state to produce the official voter information guide and in several languages,” said Albin Rhomberg, a spokesman for the pro-amendment campaign.

Rhomberg said his group also wants the state to strike or amend a section of the other side’s rebuttal claiming “these teens don’t need to be put on trial,” a reference to a provision of the amendment that allows judges to provide girls with waivers exempting them from the parental notification requirement.

Prop. 73 opponents are also seeking changes in ballot language but their arguments, like their name are not supported by the facts.

Meanwhile, the Campaign for Teen Safety, which opposes the amendment, brought a lawsuit Friday on behalf of two California pediatricians and a public health expert. The group said it had identified language it wants stricken from the soon-to-be-published pamphlet that is mailed to registered voters.

It objects to the phrase provided by Parents’ Right to Know: “Over 30 states already have such laws, and their real world experience shows these laws reduce minors’ pregnancy and abortion rates without danger and harm to minors,” the disputed section reads.

The group argues that the parental notification law wouldn’t reduce pregnancy or abortion rates while putting teenage girls at risk of botched abortions, poor prenatal care and family conflict.
“Frightened teenagers who have doors closed to them are more likely to take unsafe risks than get the medical care they need,” said Dr. Michael Taymor, a Palo Alto pediatrician who lent his name to the lawsuit.

How can a group call itself “Campaign for Teen Safety” when they advocate performing abortions on 12 year old girls without their parents even knowing?