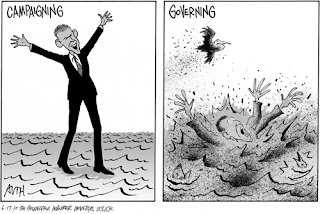 As the 2010 midterm election approaches, President Barak Obama is no longer talking about change we can believe in. Instead, his rhetoric has shifted back to blaming Bush and the Republicans and declaring that things would be much worse if he wasn’t in charge.
A recent Associated Press article made note of the significant change in messaging:

President Barack Obama, who rocketed to the White House promising “change you can believe in,” is now telling voters they shouldn’t change a thing.
His message for the fall elections, which are looking ominous for his Democrats, is that Republicans caused the nation’s economic troubles, but he and the Democrats are starting to fix them. So stick with the Democrats and don’t go back to the GOP.
“This is a choice between the policies that led us into the mess or the policies that are leading out of the mess,” Obama said recently in Las Vegas.
Trouble is, it’s a tough sell to voters who’ve seen little progress.
Unemployment is stuck near double digits and polls show many voters have decided Obama’s policies are to blame, not his predecessor’s.

This is despite the President’s attempts to continue to blame the previous administration that has been gone for over a year and half as well as congressional Republicans who haven’t been in the majority in either house since 2006. The voters recognize that this is his  mess and he needs to own it. But, we all know that is not going to happen.

Obama often frames the argument by saying that Republicans had their chance to drive, then drove the car into a ditch and shouldn’t get the keys back. But voters may be concluding that Democrats, who control the White House and both chambers of Congress, have had their chance at the wheel, too, and haven’t gotten very far.
“From the American public’s point of view, the people in charge at this point are the people who own the problem,” said Andrew Kohut, head of the nonpartisan Pew Research Center.

The truth is that the Obama Campaign created a level of expectation that the Obama Administration would never be able to live up to. And now that reality has set in for the voters, the blame game is al the Democrats have left.

But Obama’s pickings were slim when it came to campaign themes.
The narrative that worked so well when Obama was a presidential candidate offering himself as a transformational figure who could change Washington is no longer at his disposal. He can hardly claim to have delivered on that promise because he hasn’t changed Washington, at least not much, as he’s acknowledged.