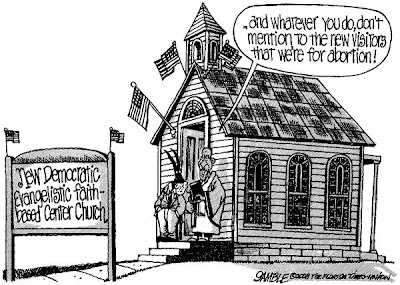 For those who believe that the debate over abortion is dead, I have new for you!

A recent poll conducted by Gallop revealed that of all the decision President Obama has made during his term’s infancy, it was his decision to approve funding for organizations to provide abortions overseas that is most unpopular with voters.

…Obama’s decision to reverse the prohibition on funding for overseas family-planning providers may be the least popular thing he has done so far. This was an executive order that forbade federal government money from going to overseas family-planning groups that provide abortions or offer abortion counseling. Fifty-eight percent of Americans disapprove of Obama’s decision to lift this ban, while only 35% approve of it. The ban on federal funds to these groups was put in place by Ronald Reagan, but lifted by Bill Clinton. George W. Bush re-instituted the ban after taking office in 2001, but Obama has once again lifted it.

Even more interesting is the fact that Republicans were not the only ones opposed to this decision. According to Gallop, 67% of independent voters disapproved as well.

And for my fellow GOPer’s who advocate for having abortion striped from our party platform, take note… 92% of Republicans polled opposed overseas funding of abortions.

Keep that in mind!