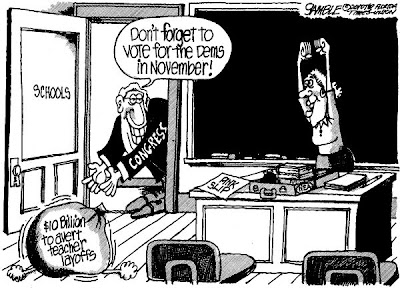 Once again Democrats with the help of a few soft minded Republicans have passed a massive spending bill to help keep state and local governments from having to make the tough decisions it will take to balance their budgets.
According to the Associated Press:

The $26 billion measure would help states ease their severe budget problems and – advocates said – stop the layoffs of nearly 300,000 teachers, firefighters, police and other public employees.

Where have we seen this before? Oh yeah… the Stimulus Bill. Remember that massive spending program that was supposed to stimulate the economy and create jobs? But what it mostly did was plug holes in state and local government budgets.
For example, in California stimulus spending was reported to have saved around 100,000 jobs. But a closer analysis found that 90% of those were government jobs; this at a time when the Golden State has actually increased the number of government jobs.
The sad part is that because the funding was for only one year, many of those jobs are on the chopping block this year. Not so fast! Here come the liberals to the rescue.
And what is their solution? Give states more money! This is like giving an alcoholic the keys to the freshly stocked liquor cabinet. They may be content for a while. But as soon as the well runs dry, they’ll be asking for your credit card to go shopping for more.
Any clear thinking individual has got to see that these same jobs are going to be on the line again next year as budget dollars will continue to be in scarce supply. Why keep putting off the cuts you know you are eventually going to have to make? A political payoff is the only explanation.

The current measure is heavily backed by unions for teachers and public employees, key allies of the Democratic Party. The American Federation of State, County and Municipal Employees ran ads Wednesday in four Maine newspapers urging Collins and Snowe to help break the filibuster.

Bailing out those who refuse to make responsible choices is a surefire way to ensure that they never have to. That is until we are no longer able to borrow or simply print the money to do so.