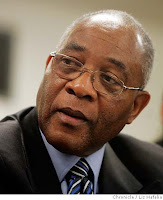 Senator Barak Obama’s quest for the presidency has been in major turmoil over the last few weeks. These problems have stemmed from controversial comments made by his former pastor, Jeremiah Wright. These statements were made from the pulpit of his church which Obama attended for over 20 years. For those of you who have not heard these comments, let me just say that they were incendiary, anti-American, racist and needless to say, not very Christ-like. (Click Here to see the video)

But the fact that Jeremiah Wright would make such hateful comments doesn’t surprise me at all. The truth is, he is not the only “Man of God” that has chosen to use his platform to advance an agenda that has nothing to do with God.

Just this week the San Francisco Chronicle wrote about sermon delivered by a Rev. Amos Brown on Easter Sunday. According to the Chronicle:

The Rev. Amos Brown’s Easter sermon at the Third Baptist Church of San Francisco didn’t have much to do with Jesus’ crucifixion or resurrection from the dead and instead covered everything from skyrocketing gas prices and the subprime mortgage crisis to race relations in the United States and presidential politics.

During his fiery Sunday morning speech, he called President Bush a “one-eyed man,” told the predominantly African American congregation that the country is as segregated now as it was 50 years ago and said “America is running on fumes right now … we are on the wrong road.”

So, instead of using the occasion to recognize the death, burial and resurrection of Jesus Christ; Rev. Brown chose to berate the President of the United States, and declare the recent criticism of Obama to be a conspiracy hatched by white America. I must have missed that part of the Easter Story…

Like the Pharasis in Jesus’s time, Jeremiah Wright and Amos Brown have taken to perverting their roles as Shepards, leading their congregants not to Christ, but to a modern day “Black Nationalism” that is based in hatred and mistrust of America; White America, specifically.

Now this is not to say that these men are not entitled to express their opinions. But God holds those who represent him to a higher standard.

I will not go as far as saying the Barak Obama agrees with all of his pastor’s views. But I do believe that his decision to sit under the teachings of a man who possesses such heartfelt views does raise legitimate questions about his judgment.

And his lack of judgment in the selection of his pastor should serve as an indication of how he will go about selecting his advisors, should he become president.