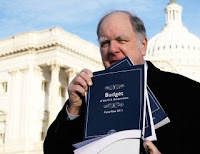 In 2006 Rep. John Spratt(D) declared of Republicans, “If you can’t budget, you can’t govern.” Well now that he is in charge of the budget, he has changed his tune!
House Democrats have chosen not to even pass a budget this year. Instead, they will pass a “Budget Alternative” which will continue spending at last year’s level. So what’s the big deal?
Well this alternative budget leaves out some very important facts; like a projected annual budget deficit averaging over $1 Trillion a year for the next 10 years!  As reported by The Hill:

House Budget Committee Chairman John Spratt (D-S.C.) said the alternative would be the “functional equivalent” of a full-fledged budget. But because it won’t be a traditional budget resolution, it will be silent on future deficits, which are expected to average nearly $1 trillion for the next decade.
Democrats have expressed concern about voting for a document showing lots of red ink in an election year.

Even those who are fond of comparing the spending during the Bush years to that of our current President are silent. The truth is that the highest deficit under President Bush was $450 billion. Back in 2009 The Heritage Foundation Reported”

It is true that, between 2002 and 2009, the budgets largely shaped by President George Bush will have run cumulative budget deficits of $3.35 trillion. This calculation credits the entire 2009 budget deficit and TARP costs to Bush, even though Obama will have signed most of the discretionary spending bills and overseen much of the TARP spending.
But Obama does not have much high ground. The “stimulus” bill alone will create more debt (approximately $1 trillion including interest costs), than Bush’s first three years of budget deficits combined ($948 billion).

So, if the numbers are already out there, what are Democrats trying to hide? One has to wonder if the projected deficits are even greater that we know. And if President Obama signs this “Budget Alternative”, what does that say about his commitment to “Transparency”?