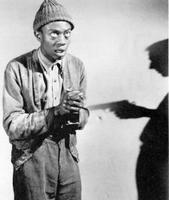 For those of you who missed it last week, Congressman Charlie Rangel stated “George Bush is our Bull Connor! And if that doesn’t get to you, nothing will be able to get to you. It’s time for us to be able to say that we’re sick and tired, we’re fired up and we’re not going to take it anymore.”

You’re right Charlie… I, for one am not going to take your Stepin Fetchit, Uncle Tom antics lying down anymore. It is about time that you and the rest of your ilk were exposed for the sellouts you are. You have sold out your constituents, your people and your country all for the sake of the Democrat Party and your own personal agenda!

Normally, I try not to get too emotional over the nonsense spewed from the mouths of the liberal race-baiters. But this case was especially egregious. In one failed swoop, Rep. Rangel managed to trivialize both the abysmal government response to the devastation caused by Hurricane Katrina and the very serious issue of racism in America… all in an effort to promote himself and his democrat slave masters. That is why I call Charlie Rangel “Our Stepin Fetchit!”

Theophilus Eugene “Bull” Connor (July 11, 1897 – March 10, 1973) was a police official in the Southern United States during the American Civil Rights Movement and a staunch advocate of racial segregation.

Connor was born in Selma, Alabama.

As the Public Safety Commissioner of Birmingham, Alabama in the 1960s, he became infamous for using fire hoses and police attack dogs against unarmed, nonviolent protest marchers. The spectacle of this being broadcast on national television helped to catalyse major social and legal change in the South and helped in large measure to assure the passage by Congress of the Voting Rights Act of 1965; so ironically Connor’s tactics helped to bring about the very change that he was opposing. And most importantly…BULL CONNOR WAS A DEMOCRAT!!!!!!!

Stepin Fetchit (May 30, 1902 – November 19, 1985) (real name Lincoln Theodore Monroe Andrew Perry) was an African-American comic character actor whose name has become synonymous with degrading racial stereotypes in Hollywood movies of the first half of the 20th century. His stage name is a contraction of “step and fetch it”, implying his servile persona.

Perry played comic relief roles in a number of motion pictures, and his character epitomized the black stereotype of a shiftless, lazy servant of low intelligence who bowed and scraped at the feet of white actors at every opportunity.

Though Perry did not invent this stereotype, his image was used to popularize it, and many black characters in the movies, such as Stymie in the Our Gang comedies, were based upon the image of Stepin Fetchit.

Because of the degrading image of African-Americans portrayed by Stepin Fetchit, Perry’s movies are rarely screened today, and they have not seen a wide release on video. Nonetheless, film historians state that he was a talented comedian, and his career was so successful that he is cited as the first black actor to become a millionaire. He did not manage his fortune well, however, and he declared bankruptcy in 1947.

Now if that doesn’t sound like Charlie Rangel and the rest of the Black liberal leadership, I don’t know what does.

1. Their political policies are based on the assumtion that blacks are either incapable or unwilling of getting an education, keep a job or even make the most basic economic decisions for themselves.

2. Their talking points are mimicked in state houses and city hall chambers across the country by “Wanna Be” black political leaders who chose only to repeat the latest DNC talking points, no matter how stupid it makes them look.

3. They are constantly chasing after “White Liberals” for approval; Acting as their attack dogs whenever the race card needs to be played. And never questioning their DNC “Mastas” on why their policies have failed so miserably in the black community.

4. And yes! They too have been paid well for their minstral show! One only need bring up Jessie Jackson’s shakedown scam better known as Rainbow Push. As for the politicians like Rangel and Diane Watson, their payoff has come in their being allowed to serve as political overseers to their psycologically enslaved constituencies.

Sounds like a fit to me! And if this commentary comes across as inflamatory…. GOOD!!!!! It’s about time they got a little of their own medicine!