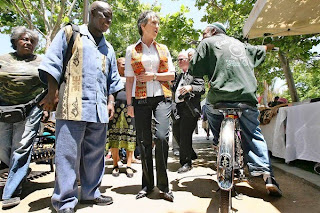 Senate hopeful Carly Fiorina and leading Gubernatorial candidate Meg Whitman have begun there general election runs early. And they have done so by targeting those who Democrats seem to take most for granted- people of color.
The LA Times reported that over the weekend Carly was the only candidate of at any level to attend a Juneteenth celebration in Los Angeles.

Though many people had to ask her staff who Fiorina was, they crowded around to shake her hand, request her autograph and thank her for visiting South Los Angeles.
“I think it’s very brave of her to come out, because she certainly knows the kind of crowd she’s facing,” said Cathy Youngblood, 58, a cultural anthropologist from Watts. “She’s shown by being here, she’s willing to listen. … Do you see any other politicians here?”

And last week Meg Whitman began running Spanish language ads during the World Cup; making her the first Republican I can remember to ever do so, as well as the only candidate doing it at this time.
This just goes to show that these are not your typical Republican candidates. And this is not your typical lineup of GOP slate of candidates. Heavy on diversity and real world business experience, they present a stark contrast to the group of liberal political insiders offered up by the Democrats.
And unlike Republicans of the past (and their Democratic opponents) this new group of conservative leaders are not taking ethnic voters for granted. A strategy that I believe will pay off in the long run.
There may be issues that separate Republicans from Black and Latino voters. However, there are just as many issues upon which we have significant agreement. The need for real reform of our public schools, abortion, protecting the definition of marriage and the need for comprehensive immigration reform that includes aggressive enforcement of existing immigration laws; are just a few areas where there is support for conservative ideas amongst black and brown voters. And just like other voters, these groups are not happy with status quo incumbent politics.
Meg Whitman and Carly Fiorina are engaging these voters; and engaging them early. They are hitting Democrats in their own backyard; making them step up and start offering a real alternative to these fresh new faces.
I hope that Meg and Carly keep up the pressure on their Democratic opponents. It will serve to not only help the GOP; but to give all voters a real choice come November.