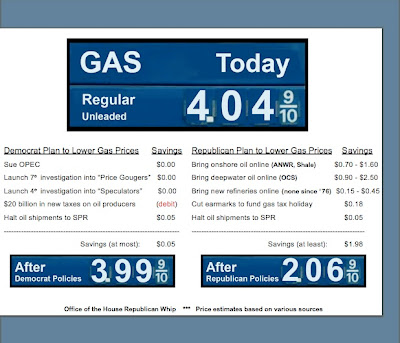 This press release just arrived in my inbox:

OBAMA GIVES THUMBS UP TO THE PELOSI PREMIUM
Meanwhile CA Gas Prices Up $1.82 Per Gallon Under Democrat-Controlled Congress

This week we learned that the Barack Obama is just fine with higher gas prices. In fact, congressional Democrats blocked efforts to lower them and instead proposed higher gas taxes that will further burden California’s working class.

Is this what the Democrat leadership mean by “commonsense”?

The Democratic Majority has given consumers the Pelosi/Obama Premium, which this week clocks in at $1.82 per gallon. That’s right, from the time the new Democratic Majority took control of congress, gas prices in California have skyrocketed almost two dollars from an average of $2.61 per gallon in January to $4.43 per gallon now.

As predicted before the summer driving season, the Pelosi/Obama Premium has only gotten worse, yet Barack Obama and other Democrats have done nothing to help Californians’ Pain at the Pump.