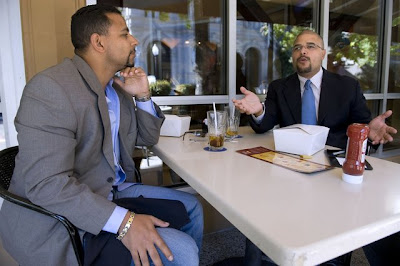 This weekend, the Sacramento Bee did a piece on my twin brother David and I. It was a really cool article. And I’m not just saying that because it is about me!

Outside the Pyramid Alehouse on 10th and K streets Thursday, it was hard not to notice the dapper DeLuz twins theatrically debating the great issues of our time.

Though Craig is sometimes confused for David and vice versa, that’s a giant mistake. Politically, the brothers are polar opposites.

David DeLuz – born 10 minutes before Craig on June 7, 1969 – is a liberal Democrat who proudly sports an Obama-Biden button and wears a blue tie and a navy blue suit.

Craig DeLuz – a quarter-of-an-inch shorter – is a conservative Republican in jeans and a gray pattern sport coat who staunchly defends McCain-Palin.

While there are physical differences between them, it’s really when the DeLuz brothers open their mouths that it’s easiest to tell them apart.

They vehemently disagree on abortion and the Iraq war.

In recent weeks they’ve heckled each other at a Black Political Forum in North Sacramento and an NAACP voter education rally at the state Capitol.

They also go at it on local radio and their blog: http://deluzbrothers. blogspot.com/.

“It’s just now getting to the point where people realize there are actually two of us,” David said. “I lost a politically connected position because they thought I was him.”

Craig said he lost a job when his potential employer found out he was the right-leaning DeLuz.

David, who was president of the Sacramento branch of the NAACP from 2002-2005, is an administrator with the California Department of Corrections and Rehabilitation “focused on offender re-entry.”

Despite their differences, David managed Craig’s 2000 campaign for Sacramento City Council (he lost to Sandy Sheedy).

“Our goal is the same, to have an engaged community that provides opportunities for everyone,” David said.

The twins haven’t bet on the presidential race “because David won’t give me enough points,” Craig said.

Craig predicts that “an Obama presidency and a Democratic Congress will be one of the best advertising tools for the Republican Party” because they’ll tax and spend Americans into oblivion.

Obama epitomizes style over substance, Craig said. “McCain is not the most attractive or the best speaker, but he’s challenging the administration and trying to find common ground, compared to a guy taking the easy route and saying whatever people want to hear.”

David fires back: “Your depiction of Barack Obama is way over the top. His record demonstrates a willingness to try new ideas. He’s right where we need to be. It’s about creating a middle class that can be a consumer class.”

The twins – born to an Italian American mother and an African American father in Richmond – were adopted by a black couple, John and Elevera DeLuz.

John Deluz, who grew up in Newport, R.I., the son of a Cape Verdian immigrant, joined the Air Force during World War II and was trained as an electrician.

But he couldn’t get a job in Oakland because the electricians union discriminated against blacks. So he wound up taking a job washing cars and later became a warehouse supervisor for Safeway.

“He’d say, ‘You’re just as good as anybody, but you’re no better than anybody, and you’re going to have to work twice as hard to get half as far as the average white boy,’ ” David said.

Both parents were dedicated Democrats.

The twins played football for DeAnza High in Richmond. Craig was nicknamed ” ‘Duke,’ for John Wayne, because I walked like a cowboy and was ready to draw down on anybody.”

“The one thing you did not want to do was mess with one of the DeLuz brothers because if you got in a fight with one of us you had three to five minutes before the other showed up,” Craig said.

Craig went to Chico State, where he became the first African American elected president of the student government. He began listening to Rush Limbaugh but didn’t become a Republican until after his son was born in April 1995.

That day, he realized $2,500 of his first big commission check for signing up members for the California Chamber of Commerce was being taken in taxes. “I said this is outrageous!”

“There have been a lot of heated arguments,” David said. “We argued a lot over Bill Clinton and morality in public service. Craig has the nerve to question the morals and ethics of Democrats in general – because we support abortion and gay rights, we are somehow morally inferior to the Republicans.”

“We argue about everything,” Craig said. “He’s a Pittsburgh Steelers fan, I’m a Dallas Cowboys fan. I belong to Kappa Alpha Psi and he belongs to Phi Beta Sigma,” rival black fraternities.

Their mother, who disliked George W. Bush and Ronald Reagan and loved Bill Clinton, “gave Craig a hard time until the day she died,” David said.

Inside the Pyramid Alehouse on Thursday, after the brothers fought over the last chicken wing, Craig declared his love for Sarah Palin.

“She’s got a reputation for taking on corruption and implementing fiscal conservatism. She took on the people who ran as Republicans and were spending like drunken liberals and booted them out.”

“Are you kidding me?” David responded. “That woman is clearly unqualified to serve as president.”

David countered: “He’s definitely going to turn away from the Bush doctrine of pre-emptive war and rely more on diplomacy, and he’s going to support working families rather than CEOs and big corporations.”

Jacques Whitfield, who worked with both brothers at the old Grant Joint Union High District where he served as general counsel from 1997 until earlier this year, says “they’re both very good at speaking up for their constituencies.”

Whitfield, now a management consultant, leans left, “but I respect Craig’s courage to stand up for what he believes in as an archconservative, even in this Democratic town where much of the agenda is progressive.”

Whitfield said Craig is a true believer and “interestingly enough, so is David. At the end of the day I love them both.”