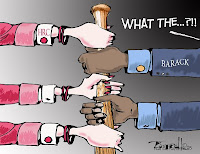 As Obama rolls to an easy victory in the Mississippi primary (61%-37%) one can’t help but notice the racial divide in the party of tolerance and racial equality. 70% of white democrats chose Hillary, while 90% of black voters supported Obama.

According the Associated Press:

In the Democratic race, Mississippi voters were strongly polarized by race, even more than in most other states that voted this year. Seventy percent of whites voted for Sen. Hillary Rodham Clinton, while 92 percent of blacks voted for Sen. Barack Obama. Clinton won among both white women, a group she normally carries, and white men, a key swing group in this campaign. Clinton won the votes of 68 percent of white men, one of her best showings to date. About half of the voters in the Democratic primary were black.