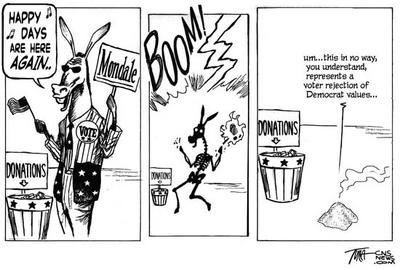 The saying used to be “It’s the Economy Stupid!” But of course that was before liberals went off the deep end into the abyss of moral relativism. A study by the New Democracy Corps clearly makes the point that when it comes to cultural issues, Democrats can’t be trusted.

Democrats have expressed bewilderment over Republican gains among lower-income, less-educated voters, saying they are voting against their economic self-interest by supporting Republican candidates. But the new Democracy Corps study concludes that cultural issues trump economic issues by a wide margin for many of these voters — giving the GOP a significant electoral advantage.

Admittedly, this study was mostly conducted with rural low-income voters. So you might find very different results in urban low-income areas. But I think this study does undermine the liberal’s attempt to promote class warfare.

They want voters to think that high income earners have more than their fair share of the pie. And the best way to fix problems in our society is to have the government take more from them to give to the less wealthy. Take California for example.

In 2004 we passed a measure imposing a one percent tax on high income earners to pay for mental health. This year Rob Reiner is proposing another one percent tax on these folks to pay for universal preschool. Then the California Legislature tried to raise the state’s top tax bracket two percent in order to pay for increased school spending, despite the $3.1 billion it was already increased this year. All of these plans put together represent and about a 45% increase in state taxes on high income earners.

This Robin Hood Syndrome that has infected California’s has had little affect on low-income voters in more rural states because as far as they are concerned, moral values trump the economic issues.

The study is based on focus groups of rural voters in Wisconsin and Arkansas and disaffected supporters of President Bush in Colorado and Kentucky. The good news for Democrats: All the groups expressed dissatisfaction with the direction of the country and with the leadership of the president and the GOP-controlled Congress.

Then came the bad news: “As powerful as the concern over these issues is, the introduction of cultural themes — specifically gay marriage, abortion, the importance of the traditional family unit and the role of religion in public life — quickly renders them almost irrelevant in terms of electoral politics at the national level,” the study said.

In other words, these voters see the attack on traditional moral values as a bigger threat to our society than class warfare that liberals are trying to manufacture. They see Democrat politicians as being anti-God, anti-marriage, anti-family, immoral baby killers. And while you would not know it by their policies, I will be the fist to admit that this is not the way all Democrat leaders are. Most of them are simply too weak and scared to stand up to the moral depravity that has taken over the Demoncrat…oops… I mean Democrat party.

Memo To Democrat Party: It’s not a change of messaging that you need. It’s a change of heart.