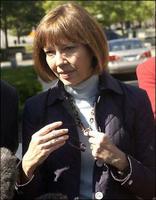 Judy Miller is the New York Times reporter who refused to give up the name Vice President Dick Cheney’s Chief of Staff as her source in a story she wrote on the leaked name of a former CIA agent. Despite being released by her source to give up his identity, Miller opted to spend 85 days in prison rather than release his name. Well now we know why.

The following story was in the celebrity section of the New York Post:

NEW York Times jailbird Judy Miller has landed a $1.2 million book deal with Simon & Schuster. The tome — which will presumably detail Miller’s imprisonment for refusing to reveal her source in a probe about a leak of a CIA operative’s name — will be edited by Alice Mayhew, who oversaw Miller’s previous two books, “God Has Ninety-Nine Lives” and “Germs,” huffingtonpost.com reports. After spending 85 days behind bars for refusing to name Vice President Dick Cheney’s top aide, Lewis “Scooter” Libby, as her source, Miller was set free after testifying before the grand jury on Friday about two conversations she had with him in July 2003.

Fox news reported that Libby give Miller the ok to release his name over a year ago, so there was clearly an ulterior motive behind her decision to do jail time. When reporting on rumors that such a deal was in the works, the folks on Fox and Friends pointed out that their viewers had been emailing them for quite some time predicting such a book deal.

Hat tip to the New York Post, Fox and Friends & their astute viewers.