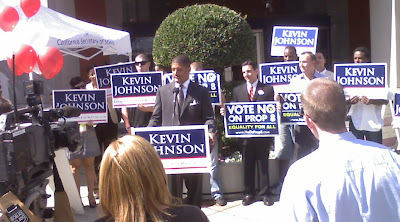 Today, former NBA point guard and Sacramento mayoral candidate, Kevin Johnson showed what I have been saying for months. (See Should Republicans vote for Kevin Johnson?) As much as he wants to portray himself as a new style political leader, when the pressure is on, he will cave on what he knows to be right.

Sacramento mayoral candidate Kevin Johnson will announce today that he opposes a Nov. 4 ballot measure that would ban same-sex marriage – even though his personal belief is that marriage is “between a man and a woman.”

According to a statement issued Tuesday by his campaign, Johnson opposes Proposition 8 “because it would write discrimination into the state constitution.”

The press release said Johnson shares views with Sen. Barack Obama and Gov. Arnold Schwarzenegger, who oppose a ban on gay marriage in California but personally believe marriage should be between a man and a woman.

“Now we just need to convince him that marriage between gay people is in fact a good thing,” Fargo said.

She said she has opposed Proposition 8 “since it has been drafted and will continue to campaign against it.” The mayor has conducted four marriage ceremonies between same-sex couples since they were legalized in June.

Fargo has been endorsed by the Sacramento Stonewall Democrats, which is the region’s largest Democraticorganization, and is campaigning to shoot down Proposition 8.

The organization’s president, Ed Bennett, said he was pleased Johnson was voicing his opposition to the proposed ban, but that his group would continue to support Fargo.

“She’s been against Prop. 8 since the beginning and her opinion
has always been voiced,” Bennett said. “She left no doubt from the very beginning.”

Back during the primary, Johnson created a quite a stir when he stated during a televised debate that he believed that marriage should be between a man and a woman. This statement had many supporters of marriage thinking that they finally had a democrat that they could get behind. Well, that didn’t last long.

Shortly after the State Supreme Court voted to undermine the voters of California and legalize same-sex marriage, Johnson’s campaign staff was quick post a statement on his campaign website stating that he fully supported the decision and would be an advocate for the LGTB community. This statement prompted criticism from some faith community leaders who supported him because of his previous statement in defense of marriage, prompting the campaign to moderate the statement. And now the statement has been changed again, removing all references to same-sex marriage.

Kevin Johnson taken the coward’s way out by trying to be on both sides of the issue. He says the he personally believes that marriage is between a man and a woman. But he opposes an initiative that would make sure that this is the case in California.

This causes me to wonder what other of his personal views will not be reflected in his administration?

He says he does not believe in raising taxes and wants to cut the size of government. But will he stand up to the public employee unions who will pressure him to expand the size of government and raise taxes? He says that he believes in economic development and promoting jobs. But what will happen when the environmentalists start clamoring to limit development? History of his story tells uu that he will cave.

Vote for Kevin Johnson if you wish. But don’t be fooled into thinking that you are voting for anything other than a Democrat who is afraid to stand up for what he claims to believe.

At least Heather Fargo isn’t afraid to stand for what she believes.