You all probably think that all I did was crack jokes about people at the convention. But I did have a chance to talk with some important people about key issues that will be on the ballot in November and even in 2006. 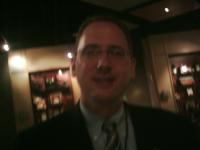 Assemblyman Chuck DeVorre believes that the passage of Prop. 75 & Prop 77 together are the key to promoting true reform in the upcoming election.

Rev. Lou Sheldon of the Traditional Values Coalition believes that voter turnout will be the key to passing Prop. 73 (Parental Notification)