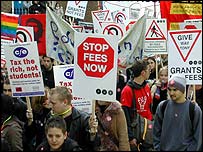 Today, Governor Schwarzenegger will release his proposed 2006-07 Budget. In it will be a proposal to freeze tuition levels for state colleges, universities and community colleges; a move that would cost taxpayers about $130 million.

Well political columnist, Daniel Weintraub argues (quite effectively I might add) that such reduction in student fees might actually hurt California’s poor and needy.

To understand why this is so, step back and consider how college fees, financial aid and university budgets work together. The lower the fees, the bigger the taxpayer subsidy to those who get no direct financial aid: the children of the most affluent citizens in our state. And the higher the subsidy for those folks, the less money that’s available for financial aid to the needy and for hiring new faculty to expand the number of slots available to everyone, including the poor.

Considering this argument, perhaps a better way to meet the goal of promoting access to higher education for California’s poor and needy would be to increase financial aid available to middle and low-income families.

Weintraub, however, goes even further to suggest that the state consider the entire state subsidy (estimated to be an average of about $15k per student per year) to be financial aid. And as such, that financial aid should be targeted to the most needy a opposed to all students.

If equity is your goal, the best policy would be to charge full-freight for a university education and then use taxpayer dollars to give subsidies only to those who can’t afford it. A needs-based fee policy would give the taxpayers the biggest bang for their bucks while helping those who need it most.

In the example given, the average cost of educating a student in the UC system is $20k per year. The state subsidy would be only $5k per year for students who do not demonstrate a need for financial aid. He states that this would free up enough money to in fact fully subsidize the education of the state’s most needy students.

With the lower fees, every student, regardless of means, gets a hidden subsidy of $15,000 per year. Multiply that by 40,000 students and you have used up the entire $600 million budget.

No money remains for aid targeted to the most financially needy students.
In the high-fee model, on the other hand, the untargeted subsidy is only $5,000 per student.

Again assuming 40,000 students, it takes only $200 million in tax dollars to support the system.

With the money left over, the state could cover the entire cost of education for all financially needy students (about half the total enrollment) and still have funds to serve an additional 8,000 students.

“For any given amount of state support, low fees and high levels of untargeted financial aid do not efficiently use the state’s limited resources and do not maximize access to higher education,” the analyst concluded.

This is an interesting proposal to say the least. Unfortunately, it is one that will never be given the full consideration it truly deserves.