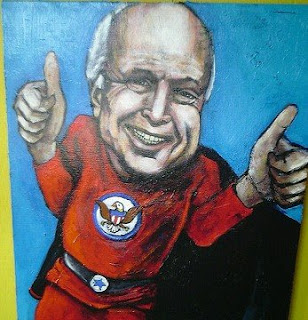 So McCain “suspends” his campaign to demonstrate leadership in the financial crisis… gets the House Republicans to obstruct a deal for no good reason and with no real alternative… and finally, says little or nothing in the key meeting between the White House and Congressional leaders…

So much for being a Maverick!

Read it here in the NY Times.

Even the official newspaper of the Republican Party could not hide the inept, disfunctional organization that is the McCain campaign. Is THIS what we are to expect if he is elected to the Presidency?

There is still hope that the Republicans can come together and get on board with a plan that, admittedly, NO ONE likes. However, to stand in the way just to give Sen. McCain a chance to have a part – and then for him to not say or do ANYTHING – is BUSH (league).