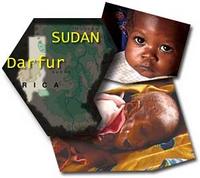 Estimates of Between 100,000 and 400,000 people have been killed so far in Darfur and the Sudanese government has done nothing to stop it. Many in the left leaning media have criticized President Bush for not being as aggressive in stopping this atrocity as he has been in prosecuting the war in Iraq.

To call these accusations hypocritical would be an understatement coming from an American median that instead of covering the most blatant act of genocide in modern time chooses plaster the airwaves with Michael Jackson, steroids in sports, Martha Stewart and other meaningless Hollywood gossip.

Well at least one New York Times columnist is willing to take his colleagues to task. Nicholas Kristof wrote:

The real failure has been television’s. According to monitoring by the Tyndall Report, ABC News had a total of 18 minutes of the Darfur genocide in its nightly newscasts all last year – and that turns out to be a credit to Peter Jennings. NBC had only 5 minutes of coverage all last year, and CBS only 3 minutes – about a minute of coverage for every 100,000 deaths. In contrast, Martha Stewart received 130 minutes of coverage by the three networks.

This explains why Martha Stewart got locked up and the murders in the Sudan remain free to kill at will. What happened to the day when network news coverage was seen as a service to the viewing public? When ratings took a backseat to informing society about the important issues and events of the day? I’ll tell you what happened… We did!

Like a parent who feeds their kids junk food all the time, simply because they want it, modern day median has chosen to appeal to the lowest common denominator in society in order to increase viewer-ship. They don’t report on Darfur because they think we don’t want to know about Darfur. They believe that the tawdry tales surrounding Michael Jackson are of greater interest.

If only Michael Jackson’s trial had been held in Darfur. Last month, CNN, Fox News, NBC, MSNBC, ABC and CBS collectively ran 55 times as many stories about Michael Jackson as they ran about genocide in Darfur.

And the saddest part about this whole story is that they are probably right. We don’t want to hear about Darfur. Just like we didn’t want to hear about the genocide in Rwanda in 1994 when 800,000 people were massacred or the mass genocide against Blacks right here in America called abortion. WE DON’T WANT TO KNOW!

So should we really blame the media for running weekly pieces on Survivor and American Idol instead of shining their light on the tragedy taking place in the Sudan? Not unless we are willing to tell them that we have done our part and let them know that we expect more from them. Well here’s your chance to do something!

Below are the email addresses of all the above mentioned news organizations:

Let them know that you would appreciate them reconsidering their priorities when it comes to what is worthy of reporting and what is not. And please ask them to make this mass genocide a priority news item.

That is of course if you think Genocide is more important than Michael Jackson. And if you don’t… At least you can thank them for providing your daily dose of Trash TV.