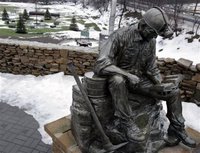 Lost in all the uproar and commotion concerning the false reports about 12 of the 13 West Virginia Miners being alive is the sad story of what went on until they learned that unlike previously reported, only one miner had survived.

John Casro, in a 7 minute interview with CNN (Video Here) tells of how those waiting in the church first got the false report that all but one of the minors was alive and how they would come to know the truth… that all but one had perished.

But what was saddening to me was the tale he told of how families and friends of the believed survivors reacted to the family of the one miner believed to be dead. Castro recalls, “The pastor asked people to come to the altar and pray for the one that was gone.” He continues on, stating that only two or three people came up to pray for the one miner who was believed to be lost. “I couldn’t understand the other four or five hundred people.”

Now I realize that not everyone of those folks were Christians. But I still find it sad that during the three hours that they were waiting to see the miners they thought to be alive, that more people could not find it in their heart to pray for the family of the miner who was thought to be the lone casualty. What a blessing they could have been to that family who was grieving the loss of their loved one. Unknown to those who didn’t pray, the peace and comfort they enjoyed wouldn’t last.

Upon hearing the news that earlier reports were incorrect, fights broke out amongst the crowd at the church. Officials who broke the news were called hypocrites and liars. And as the pastor attempted to comfort the crowd by encouraging them to look to God, one individual replied, “What has God done for us?”

You see, he never promised that we would never go through storms. But he does promise that if we have faith, he will be with us and take us to the other side. Praying that God would comfort and give peace to the family of the dead miner is what God would have wanted them to do. And perhaps in doing so, they would have prepared themselves for the disturbing news that awaited them.

Luke 6:38 says “Give, and it will be given to you: good measure, pressed down, shaken together, and running over will be put into your bosom. For with the same measure that you use, it will be measured back to you.” What had God done for them? He gave them an opportunity to find peace in the midst of pending despair. Sadly, few chose to avail themselves of it.

I applaud the faith of John Casro and those few who chose to pray when the man of God asked them to do so. I can only pray that when confronted with similar circumstances, I would demonstrate such faith. Unlike many of those who have been quoted or people I have seen interviewed, Casro’s faith clearly has not been shaken. And it is obvious that although he mourns the loss of his friends, God has granted him peace.