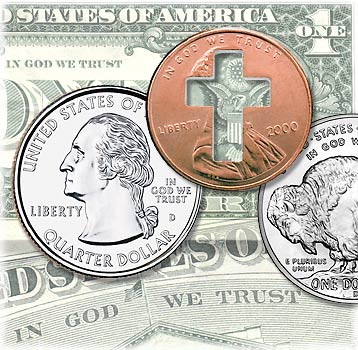 We all knew it was coming and here it is. Michael Newdow’s has officially announced his most recent attempt to remove God from the public square.

Michael Newdow said Sunday that he planned to file a federal lawsuit this week asking for the removal of the national motto, “In God We Trust,” from U.S. coins and dollar bills. He claims it’s an unconstitutional endorsement of religion and “excludes people who don’t believe in God.”

I for one am glad that Michael Newdow is doing what he is doing. For years the Anti-God left has lurked in the shadows, slowly but surly undermining the principles on which this nation was founded. And they have been very effective in their efforts to take over our judicial system, which was at one time based on Judeo Christian Principles and Natural Law and replaced this foundation with a theology of Secular Humanism.

But what Newdow is doing is putting a public face on this assault. Additionally, he is forcing us to have the long overdue public and legal debate as to whether or not we are and should remain a nation whose identity and societal standards are based in Judeo Christian principles; and whether we should acknowledge as much.

The Bible says “Blessed is a Nation whose god is the Lord.” It’s time to find out how blessed we are.