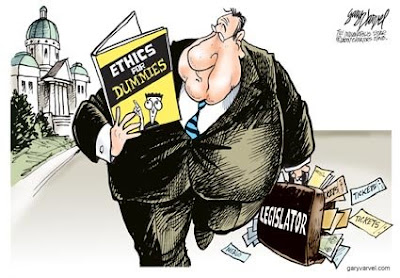 You would think we would have learned by now that passing a law simply because it “Sounds like a good idea” is no way to govern. Take for example AB 32, the high priced “Green Initiative” which requires business to cut carbon emissions utilizing technology that won’t exist until 2014. The there’s Jessica’s Law, which I like to call the “Sex Offender Omnibus Bill” which law enforcement officials up and down the state have admitted is near impossible to comply with. These are both well meaning policy initiatives that sounded good on paper, but when put into actual practice… not so much.

The bright idea of the day surrounds the California Legislatures lack of ability to come to a compromise on how to handle the fast growing budget deficit. Democrats want massive tax increases and Republicans are holding pat for substantive budget reforms and deeper cuts. And while both sides dig in their heals, doing what they believe to be the right thing, along comes a well meaning who have proposed to withhold legislator’s pay and per diem if they fail to pass the state budget on time. Sounds like a great idea right? I mean, managing the state’s finances is a big part of their jobs. And if they can’t get the job done on time, why should they get paid? (I’ve got you going huh?)

Well before you jump on the bandwagon, read this piece my good friend (and boss) Jeff Greene shared with me. It was written by Former Assemblyman Ray Haynes back during the 2004 budget impasse:

SCENARIO #1 “Assemblyman Smith, vote for this budget, and our union will write you a check for $15,000. Not to your campaign – to you personally. Buy a new car, get your wife a Louis Vuitton purse, get braces for your kids—we don’t care. Just vote for this budget and the money is yours. I know you don’t like the new taxes and spending, but I can make it worth your while.”

SCENARIO #2 “I don’t care if there are taxes in this budget, we cannot afford to forfeit another month’s paycheck! We’ve exhausted our savings and we’re not going to be able to make our mortgage payment. We’ve got a stack of credit card bills and utility payments due and no money left to pay them. I know you don’t like the new taxes and spending, but it’s not worth going bankrupt for!”

Think about it. If you are a conservative, do you really want Republicans to go up on massive tax increases simply, so that they can pay their own bills? If you are a liberal, do you want Democrats to approve deep cuts to education or social welfare programs in order to make sure they don’t miss a check?

While I think most of us can agree with the sentiment, the facts cannot be ignored. Any way you slice it up, this is a “Pay-to-Play” scheme that is a bad idea for California.