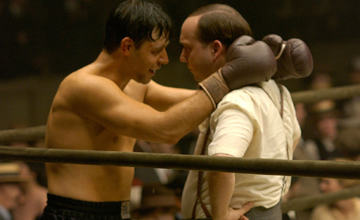 I’ll have to admit that I haven’t seen most of the movies that were mentioned this morning as the 78th Annual Oscar Nominees were being announced. But I find it hard to believe that Cinderella Man failed to get a single nomination in the top three categories (Best Actor, Best Actress and Best Picture).

But then again who cares about the comeback story of a once wealthy middle-aged white heterosexual man who is a faithful father and husband.

As I scanned the list of Oscar Nominees, I couldn’t help but wonder if Ron Howard’s, Cinderella Man was snubbed by the Academy because it was just too….I don’t know… traditional?… No….Conservative?….that doesn’t work either…I got it!… REAL!!!!

The Story of Cinderella Man is as follows:

During the Great Depression, a common-man hero, James J. Braddock–a.k.a. the “Cinderella Man”–was to become one of the most surprising sports legends in history.

By the early 1930s, the impoverished ex-prizefighter was seemingly as broken-down, beaten-up and out-of-luck as much of the rest of the American populace who had hit rock bottom. His career appeared to be finished, he was unable to pay the bills, the only thing that mattered to him–his family–was in danger, and he was even forced to go on Public Relief.

But deep inside, Jim Braddock never relinquished his determination. Driven by love, honor and an incredible dose of grit, he willed an impossible dream to come true. In a last-chance bid to help his family, Braddock returned to the ring. No one thought he had a shot. However Braddock, fueled by something beyond mere competition, kept winning.

Suddenly, the ordinary working man became the mythic athlete. Carrying the hopes and dreams of the disenfranchised on his shoulders, Braddock rocketed through the ranks, until this underdog chose to do the unthinkable: take on the heavyweight champ of the world, the unstoppable Max Baer, renowned for having killed two men in the ring.

The reality is Cinderella Man doesn’t fit the Hollywood left’s view of society. There is no oppressor, just unfortunate circumstance. There is no victim group mentioned. No minority group, oppressed women or gays are metnioned. And of course once wealthy middle-aged heterosexual white males can never be victims. Not in their in their movies! And the foundation of his comeback is not some liberal idea of fairness or hand out, but the determination of one man, who powered by the love for his family, refused to be defeated.

What struck me most about this movie was not the boxing tale that was told. That was nothing more than a backdrop. It was the trials and tribulations he went through in a desperate effort to provide for his family. Here was a man who, one minute was living in the lap of luxury and now had to forgo eating himself in order to feed his children. But the loving bond between he and his wife never faded. As a matter of fact, as things got tougher, they got closer. And in the midst of despair, he whatever it took to kept his character in tact.

As a husband and a father whose family has been through tough times, I related to this character. He was a far cry from the “Cut and Run” characters today who would abandon their families simply because they “Weren’t happy….” He latched onto the love and support of his wife; who by the way was as much a hero in this tale as her husband. And together they overcame their circumstances.

Perhaps they should have made the story about a black boxing champion who was wrongfully imprisoned for murder? But I’m pretty sure that one has been done. Wasn’t it called Hurricane?

I know! Maybe they should have made the lead character a woman! Yeah! She could get a shot at the championship only to get injured and paralyzed. And to really get the PC vote they could have her trainer put her out of her misery by killing her. Man that sounds familiar…. Oops! That’s Million Dollar Baby.

Ok…Try this one. The lead character falls in love with is trainer! And the two carry on a secret love affair as he fights his way to the top. We could call it Cinderfella Man or Broke Back Boxer. Maybe then the Academy would find it worthy of a nomination.

In any case, Cinderella Man tells an inspiring story! It contains great performances by Russell Crowe and Rene Zellwegerr, her best ever by my estimation. And the pictures lone Oscar nominee, Paul Giamatti (Best Supporting Actor) was as real a he could be in his role as Braddock’s. I encourage all of my readers to add this timeless tale to your DVD collection.