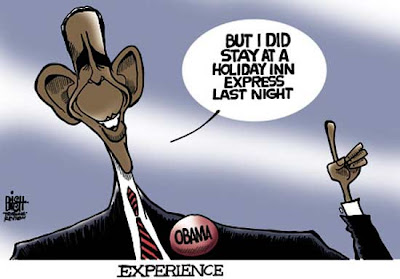 Barak Obama once again proves that he is a not quite ready for primetime player. He declared that we could solve our economic problems if only we could get politics out of the way.

Obama wrapped up his tour of battleground states with a summit focused on economic issues.

Barack Obama told top business leaders Thursday that politics often gets in the way of solving problems that threaten America’s ability to stay competitive in the global economy.

“There is surprising consensus in this country about what needs to be done — somehow our politics prevent us from acting on that consensus,” Obama said at an economic summit meeting. “We spend an enormous amount of time talking about what separates us, along party lines, along racial lines, along economic lines, but when it comes to how we need to retool America to continue its greatness, we’ve got a lot of stuff that we can agree on.”

According to his website, here are some of the policies he advocates that we could find agreement on:

But here is the problem… He and his fellow Democrats have failed to support any of these measures.

They won’t support tax cuts for ALL working families. They refuse to support a flat tax, which would simplify the tax code overnight. They only want to support R&D tax credits for industries they approve of, not the ones that actually create jobs. And the union bosses that run the Democrat Party will not allow business to offer their employees the same flexible work schedules that their members often enjoy.

No… The “solutions we agree on” that Obama is talking about are the ones that he and his fellow liberals have cooked up. If he has his way we will be mandating “green technologies” that don’t yet exist, compelling employers to unionize against their will, raising the minimum wage and mandating that employees get more paid leave.

How exactly will these policies improve the economy?

Democrats need to realize that the government cannot do anything to improve the economy except getting out it’s way by freeing business from overregulation and getting out of the pockets of American families.