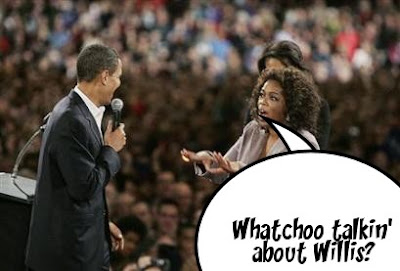 As much fun as liberals and the media like to make of President Bush’s verbal gaffes, one would think that they would at least be fair in their reporting and cover at least some of the misstatements by the presumtive democratic nominee Barak Obama.

Well syndicated conservative columnist, Michelle Malkin put together an abreviated list of such verbal mis-steps, I though you might enjoy reading .
* Last May, he claimed that Kansas tornadoes killed a whopping 10,000 people: “In case you missed it, this week, there was a tragedy in Kansas. Ten thousand people died — an entire town destroyed.” The actual death toll: 12.

*Last week, in front of a roaring Sioux Falls, South Dakota audience, Obama exulted: “Thank you Sioux City…I said it wrong. I’ve been in Iowa for too long. I’m sorry.”

*Explaining last week why he was trailing Hillary Clinton in Kentucky, Obama again botched basic geography: “Sen. Clinton, I think, is much better known, coming from a nearby state of Arkansas. So it’s not surprising that she would have an advantage in some of those states in the middle.” On what map is Arkansas closer to Kentucky than Illinois?

*Obama has as much trouble with numbers as he has with maps. Last March, on the anniversary of the Bloody Sunday march in Selma, Alabama, he claimed his parents united as a direct result of the civil rights movement:

“There was something stirring across the country because of what happened in Selma, Alabama, because some folks are willing to march across a bridge. So they got together and Barack Obama Jr. was born.”

Obama was born in 1961. The Selma march took place in 1965. His spokesman, Bill Burton, later explained that Obama was “speaking metaphorically about the civil rights movement as a whole.”

“Here’s something that you will rarely hear from a politician, and that is that I’m not familiar with the Hanford, uuuuhh, site, so I don’t know exactly what’s going on there. (Applause.) Now, having said that, I promise you I’ll learn about it by the time I leave here on the ride back to the airport.”

I assume on that ride, a staffer reminded him that he’s voted on at least one defense authorization bill that addressed the “costs, schedules, and technical issues” dealing with the nation’s most contaminated nuclear waste site.

*Last March, the Chicago Tribune reported this little-noticed nugget about a fake autobiographical detail in Obama’s “Dreams from My Father:”

“Then, there’s the copy of Life magazine that Obama presents as his racial awakening at age 9. In it, he wrote, was an article and two accompanying photographs of an African-American man physically and mentally scarred by his efforts to lighten his skin. In fact, the Life article and the photographs don’t exist, say the magazine’s own historians.”

* And in perhaps the most seriously troubling set of gaffes of them all, Obama told a Portland crowd over the weekend that Iran doesn’t “pose a serious threat to us”–cluelessly arguing that “tiny countries” with small defense budgets can’t do us harm– and then promptly flip-flopped the next day, claiming, “I’ve made it clear for years that the threat from Iran is grave.”

Why? Why you ask? Here are a few examples of why we love the Bush-isms…. Courtesy of Salon.com:

“I welcome you all to say a few comments to the TV, if you care to do so.”—Inviting visiting Irish dignitaries to address the media, Washington, D.C., Dec. 7, 2007

“I want to thank the dozens of welfare to work stories, the actual examples of people who made the firm and solemn commitment to work hard to embetter themselves.”—Washington, D.C., April 18, 2002 (Thanks to George Dupper.)

“One of my concerns is that the health care not be as good as it can possibly be.”—On benefits provided to military personnel, Tipp City, Ohio, April 19, 2007

“You know, one of the hardest parts of my job is to connect Iraq to the war on terror.”—Interview with CBS News, Washington D.C., Sept. 6, 2006

THERE ARE DOZENS MORE WHERE THESE CAME FROM! NO ONE COULD POSSIBLY MAKE ALL THIS UP! Bush.. the gift that keeps on giving…!