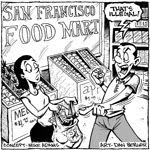 A bill that has been circulating around the capitol all year now has a new number, but it’s still just as bad.

In the 11th hour “gut and amend”, legislation that would impose a $0.25 tax on paper and plastic grocery bags. A similar bill was held by the Senate Appropriations Committee earlier this month, yet the proponents are attempting to advance this proposal during the waning days of the legislative session.

AB 2769 being introduced here in California would place a twenty-five cent fee on every plastic or paper grocery bag used. This legislation was proposed by Assembly Member Lloyd Levine and amounts to a regressive tax that will hit the working class the hardest. Consumers in the state of California use 600 bags per second. If AB 2769 was passed than that would be $150 out of consumers pockets every single second. As a matter of fact, a recent Department of Finance analysis concluded that this tax on just plastic grocery bags used would result in $4.75 billion in new costs on consumers. And this new bill would actually tax ALL GROCERY BAGS.

Plastic bags were first developed as an environmentally friendly substitute to paper bags. In a time when energy costs are rising, it still makes sense to use plastic, which require far less energy to produce than paper bags and are fully recyclable.

Less than a year ago the legislature passed Levine’s AB 2449 improving the recycling programs for plastic bags. And now,before we have even had a chance to see if this measure would make a difference, Levine has already ruled it a failure? How about giving this new law time to succeed?

In 2006, 812 million pounds of plastic bags were recycled — a 24% increase from 2005. This alone shows how a little information, as opposed to a tax, can go a long way in educating the public on how to do the right thing.

At a time when the state of California faces both fiscal and environmental problems, it is imperative that we find the most cost-effective way to meet these challenges. Well, AB 2769 goes in precisely the wrong direction.

Paper and plastic grocery bags are fully recyclable with curbside and drop-off programs available throughout the state. Ironically, California recently enacted the nation’s first state-wide plastic bag recycling statute. This program is just over a year old and the Integrated Waste Management Board has yet to publish any data indicating the amount of material being recycled under this law.

Nevertheless, indications are that more plastic grocery bags and other film-type plastics are being recycled in increasing numbers. In fact, Assembly member Levine agreed writing in a recent Op-Ed “that law has already resulted in a substantial increase in both plastic bag recycling and the use of reusable bags, thanks to environmentally conscious consumers.”

If the author of this legislation agrees that California’s existing recycling programs are working, why would the Legislature considering abandoning this new program and saddling consumers with a new tax proposal that does nothing to advance the recycling of these products?

Proponents argue that this legislation is an incentive for consumers to bring a reusable bag to the grocery stores. While this option is surely suitable for some, it is not a practical option for many especially those that rely solely on public transportation. Furthermore, consumers who accidentally forget to bring a reusable bag are left with no choice but to pay this exorbitant tax on a product that is fully recyclable and where recycling opportunities are becoming more convenient. AB 2769 does not make sense.

The Legislature should give the state’s recycling programs an opportunity to work and not further burden hard-working families with yet another tax proposal.