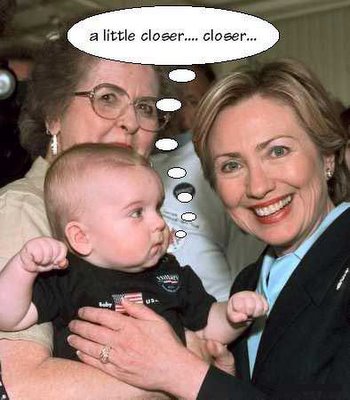 It appears that attempts by Hillary Clinton to reinvent herself are not working out as planned. As she moves to the right by straddling the Iraq war fence and co-sponsoring legislation to make flag-burning a crime, voters on the left are hopping mad and voters on the right aren’t falling for it.

According to Angus Reid Consultants support for Hillary’s 2008 presidential bid has fallen dramatically:

The number of adults in the United States who would support Democratic New York senator Hillary Rodham Clinton in a presidential election fell last month, according to a poll by Rasmussen Reports. 25 per cent of respondents say they would definitely vote for the former first lady in 2008, down five points since mid-November.

This sudden drop in support coincides with her most recent attempts to woo the right. As Democrats step up the promotion of their “cut and run” strategy for Iraq, Hillary has refused to join their chorus, while at the same time criticizing the Bush administration for not offering an exit strategy. Additionally, she has signed onto a bill by Republican Senator Bob Bennett of Utah that would make flag-burning a federal crime right after reiterating her opposition to a constitutional amendment to flag-burning by likening it to the KKK burning crosses. Clearly Hillary doesn’t understand that she can’t have it both ways.

The fact that her poll numbers are falling is just one indication of her waning support. Reports out today are that she will actually be drawing a credible challenger for in her bid for re-election to the US Senate. Well know labor activist and Wal-Mart critic Jonathan Tasini may be entering the race for the Democratic nomination against Clinton. There is also the newly announced campaign by Codepink to “Bird-dog” the senator for her lack support for the immediate removal of troops from Iraq.

Apparently, Hillary is learning that John Kerry style public policy isn’t going to fly. There is simply no logical way to be on both sides of the same issue.