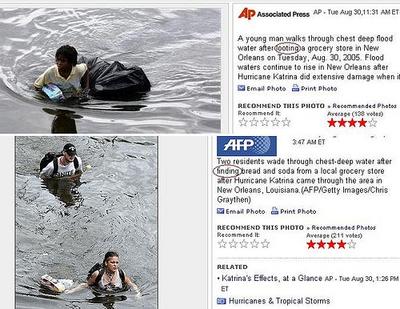 While visiting Booker Rising, I came across this story.

Here are two pictures of victims of Hurricane Katrina doing what they have to in order to survive. Both pictures feature people wading through chest high flood waters carrying with them food and water they have taken form local grocery stores. That is about where the similarity ends.

As you can see the survivor in the top photo is black, while the bottom picture has two white survivors. But what is most perplexing is the difference in the captions.

But the caption describing the white storm victims says the following:

So much for a “Culturally Sensitive” liberal media.

The photo of the White’s who “found thier groceries” has been removed and Yahoo News has posted a statement in regards to the wording controversy. (Click Here to read) Meanwhile the picture of the Black “Looter” is still up!

You can also read Salon.com story on the wording issue.