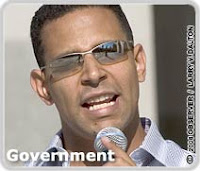 It is rare that a Republican urges the overthrowing of the government, but Craig DeLuz did just that recently when he spoke during a voter awareness drive hosted by the Sacramento NAACP.

“You can overthrow the government,” he said. “If you’re not doing your job, we will vote you out.”