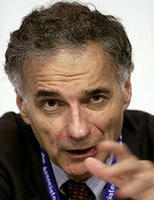 In and interview with NPR’s Ed Gordon former presidential candidate Ralph Nader stands behind his claim that he felt like Ni**er as Democrats fought to keep him off the ballot during the 2004 presidential election.

“… that the Nader Camello ticket had, not just in the southern states but in places like Pennsylvania and Ohio, with the democrats openly assaulting our candidacy...” was a lot like what the “Political Bigots” did to Black voters prior to the 1960’s.

I guess he can “feel our pain” seeing as how it is Democrats who have repeatedly enacted policies that have been instrumental in keeping Blacks down for years.

Anyway, since folks don’t like me using the N-word in my posts (despite the fact that is was the word he in fact used) So, I decided to coin a phrase that originated at the New Leadership Blog (See Comments).

I figure we can use his oppression as a symbol of modern day subjugation by the Democrats…oops… I mean the man! You know what I mean?

They’re just trying to keep a Nader Down!