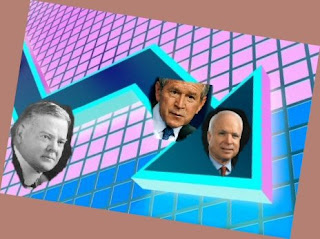 The Republicans want you to believe that the Democrats are solely to blame for the financial crisis, even though they themselves had 10 years to fix the problem (including four years of control of both the White House and the Congress).

Now, since that lie didn’t work, they want to pin the tail on the Donkey by pointing out all the money Dems have taken from Fanny and Freddy (see Craig’s recent post). Well, now comes an interesting post from Mercury Rising, which lays out the REAL story of money from Fanny and Freddy between 1989-2008:

1). Althought several of the top recipients of cash from Fanny and Freddy were Dems, among those who received over $20k, 39 were Democrats, 31 were Republican and Independent traitor Joe Lieberman (who in my book is toast).

Also, as of 2007 there are 28 members of Congress who own stock in Freddy and Fanny – 17 of these are Republicans, including Sen. John McCain! These members have direct, financial interests in these companies.

Bottom line, blaming Democrats for this mess does not hold water. However, neither party is clean in this, and there needs to be a bi-partisan solution to this mess. Oh, wait! Let’s hope that by Monday we will have a plan in place.