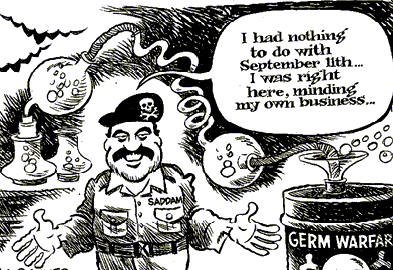 As those on the left continue to beat the “There were no weapons of mass destruction” drum, secret tapes have been released that provide proof that Saddam Hussein and the Iraqi government proving otherwise. On the tapes released by ABC’s Nightline, Saddam and his top aides discussed potential terrorist plots, the ease with which they could reconstitute their WMD program and their successful deception of UN weapons inspectors. (Video Here)

ABC has posted transcripts of the tapes in which HUSSEIN KAMEL is quoted as saying:

Sir, I would not be speaking so openly if it were not for your excellency’s and Mr. Tariq’s clarification and statement that we produced biological weapons.

We did not reveal all that we have. On the subject of missiles, they can bring up three issues with us now, in one year or in two years’ time. They are undeclared — one of them being the location. Secondly, they don’t know about our work in the domain of missiles. Sir, this is my work and I know it very well. I started it a long time ago, and it is not easy. The issues are more dangerous, a lot more dangerous than what they came to know. I am explaining to your excellency, sir.

For me, the most interesting part of this story is the fact that it seems to be a non-story with the MSM. Let’s see how long it is before the my fellow bloggers for them to talk about this most damning proof that we were justified in removing Saddam Hussein.