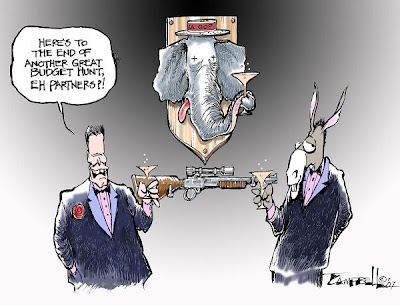 Finally! More than two months after the consitutional deadline to pass a budget, Senate Democrats finally put a budget proposal up for a vote. And it is not news to say, it failed on a party-line vote.

But what is noteworthy is that while Governor Arnold Schwarzenegger praised the Democrat budget proposal that increases both taxes and government spending, calling it “Very Courageous”. Legislative Republicans, whose votes are needed to pass the budget are not so impressed.

Gov. Arnold Schwarzenegger today praised a new Democratic version of the state budget as “very courageous” and urged Republican senators to vote for it.

Schwarzenegger was 500 miles away in San Diego, campaigning against any budget that relies on borrowing money from local governments and transportation funds, as the Senate began debating the new Democratic version. He issued his words of praise in response to a reporter’s question.

The new Senate Democratic version is based on Schwarzenegger’s own latest proposal to break a near-record-long stalemate, with its centerpiece being a one-cent increase in the state sales tax for three years. Its chief difference is that Schwarzenegger would reduce the sales tax below the current after the three-year period while Democrats would merely end the extra penny without a further decrease.

Schwarzenegger stopped short of saying he would sign the new version.

On the other hand, Republican Assembly Leader, Mike Vilines sent out the following statement which appears to express the sentimant of most (if not all legislative Republicans):

“Today’s budget vote was neither courageous nor productive – it was more of the same from liberal politicians who would rather pick the pockets of hardworking families instead of cutting wasteful spending.

“Assembly Republicans commend our Senate Republican colleagues for defending hard-working Californians from billions in higher taxes and billions in new spending by standing united against the Senate Democrat budget. It’s clear that Senate Democrats didn’t even have unanimous support in their own caucus for this half-baked proposal.

“Their irresponsible budget would have hurt working families by increasing the state sales tax, threatened public safety byincluding a dangerous direct discharge parole scheme and done nothing to reform our broken budget system.

“Now that the Senate has joined the Assembly in rejecting a budget proposal containing tax increases, I hope we can finally get serious about working together to reach consensus on an honest budget compromise. We must come together to craft a state budget that helps California live within its means, improves our economy and protects Californians from higher taxes.”

One thing can be said for sure, the liberals who are working to increase our taxes are not interested in working with Republicans to truly fix this budget mess.