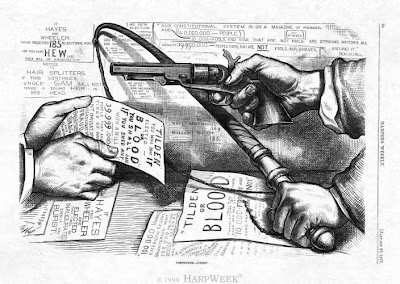 There are many in the Republican Party who claim that the only way we can win is by changing our positions on some of the more controversial issues. Specifically, they would like to see us eliminate our Party’s opposition to abortion and same-sex marriage, as is outlined in our party platform.

It is for these folks that I offer this brief history lesson, outlining what happens when we compromise what we knew to be right in order to win an election. It was Republican’s agreement to the Compromise of 1877 eventually ended reconstruction and ushered in 100 years of Jim Crowe and oppression of blacks, all so we could have a Republican in the white house .

Once the parties had agreed to these terms, the Electoral Commission performed its duty. The Hayes’ electors were selected and Hayes was named president two days before the inauguration.

This deal effectively ended reconstruction. As it died, Republicans and Democrats made promises that the civil rights of all Southerners would be respected. And for a few years this was the case.

However, by the 1880s it was clear that the northern troops would never return. Thus, as the threat faded, Democrat officials were less likely to investigate and convict those implicated in voter intimidation, making Democratic victories even more lopsided as black voter participation (the most important Republican in the south at the time) began to decline.

Then, by the 1890s, the “redeemer governments” began to segregate facilities by race and the lynching of blacks began to accelerate greatly and soon more blacks than whites were being killed without the benefit of a trial. The final “approval” of the redeemer governments came in 1898 when the Plessy v. Ferguson decision legalized segregation with the famous phrase, “seperate but equal.”

With that victory segregationists accelerated the separation of the races and soon did not even bother to worry about the “equal” part. Also in the 1890s, the great denial of civil rights to Southern blacks became commonplace as poll taxes, literacy tests and intimidation effectively ended the practice of voting by Southern blacks.

This 19th century version of “postpartisanship” would in the end, ruin our nation and our party for the next 100 years; all because of our willingness to sell out our values, simply to win an election.